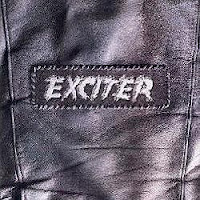 Following Unveiling the Wicked, Exciter endured a few more shifts in their unstable career. The band moved over to the brief-lived Maze Records imprint, closer to home in Toronto; their fourth label in five albums. The band also decided to bring on a dedicated vocalist that Dan Beehler might focus on the drumming, though he does still contribute quite a few screams when necessary. The result of these maneuvers was the 1988 self-titled record (also known as O.T.T. or Over the Top for the 2005 re-release through Megaforce), and like a lot of such statements, it marked a newly defined sound for the band along with its simplistic, black shining leather cover. Not exactly a new direction for the Canadians, as the melodic nature of the riffing draws back to Unveiling and the wailing vocals have been with the band in varying amounts since the start, but of all Exciter's albums, this is perhaps the biggest departure from the norm.

Many bands reach that point where they've deviated so far from their origins that the inevitable brand of 'sell out' is applied to their latest output. For Metallica, that would be The Black Album. For Slayer, the bouncy Diabolus in Musica. For Exciter, I could see why some might apply such a label to this particular record, though usually it's not such a big ordeal for a smaller act like this who were well off the radar of most mainstream metal fans even at their peak. In their defense, though, the tunes written for Exciter are for the most part stock melodic power speed metal. It's not like the band glammed up and started prancing around the stage like ponies with pants three sizes too tight. They still kept the same general look, and the same guitar and scream-driven songwriting process that fueled the last album. However, I don't think anyone could argue that they weren't attempting to broaden the audience here, and a lot of that shines through the actual production of the disc, which I found to be its primary detriment.

In the past, Exciter had had such a raw passion to their records that one could almost always grasp the rebellious, almost punk-inspired aim that they shared with other speed metal pioneers like the mighty Motörhead, but for this 5th effort they really 'cleaned up' their sound, to the extent that it's irritably polished to the point of no return. Gone are the powerful, potent and primitive riffs that drove Heavy Metal Maniac or Violence & Force, replaced with a mix of friendlier, melodic rhythm guitars dowsed in Brian McPhee's trailing leads. Granted, the guy can play, and this tidier production plays up the clarity of his performance, but it also serves to gimp the strength of the songs, and it comes off rather dry. His leads are solid, and the brief melodic flurries he fashions for a piece like "Scream Bloody Murder" or "Eyes in the Sky" are not without merit. I mean, never would I have expected a classically influenced lead bridge in an Exciter track, but on "Enemy Lines", there it is...

The problem is, that while McPhee's more practiced composition might fit this cleaner veneer, the vocals feel far too restrained by the production, and in response, both newcomer Rob Malnati and Dan Beehler, who have comparable screams and mid-ranges, feel like a bunch of harpies trying to escape a cage at a mythological petting zoo. Track like "Scream Bloody Murder", "I Wanna Be King" and "Playin' With Fire" seem almost awkward when they reach the higher range, and it's a pity, because these are probably the most in tune and professional vocals the band had yet meted out. I also really don't like the rhythm guitar tone that much, it's parched and punchy and in truth, most of the actual riffs felt overly familiar even for its time. As for the drums, they're balanced and acceptable in their execution, but lose some of the wild power that they had on Long Live the Loud.

Exciter feels effectually more like something Riot or Fifth Angel would have released, only both those bands were far more talented at composing such epic, melodic power/speed metal which cried out into the night. If one were to, say, compare this to the Fifth Angel debut or Thundersteel, they would find this instantly outclassed and outpaced. That's not to say it sucks, because a few of the cuts like the aforementioned "Scream Bloody Murder" and "Eyes in the Sky" show some promise, but the album is riddled with a few duds like the shitty "Ready to Rock" which is pedestrian 80s Quiet Riot wannabe bar metal at best, or "O.T.T." itself which has a generic, bluesy NWOBHM strut to the riffing but fails to manifest anything interesting. I also didn't feel like the new vocalist added all that much to the band...he's got a decent voice, and had some experience in another deep-underground Canadian band called Crypt (who put out an album of their own in '87), but it's clear he wasn't brought in to rock the boat and develop his own style, but to merely hold the lines that had already been drawn by Beehler previously.

In the end, this is probably the least enjoyable Exciter record as far as I'm concerned. It does have its moments, and not all the songs and melodies are throwaway, but I found it a fraction too fragile for what I would have liked, far more than even Unveiling the Wicked, and the lyrics are the among their weakest. I've got no real problem with some AOR hard rock or light metal of the late 80s, but the songwriting here never feels developed enough, the vocal lines shrieky and on pitch but never memorable in their note progressions. It's not the worst way to kill 40 minutes, and I don't think they've ever really released a 'bad' album, but it's all too easy to pass on when compared with any of the heavier, more charming work they've released, whether that be the early cult classics or the decent efforts since. Thankfully this was a rather short phase in the band's history.