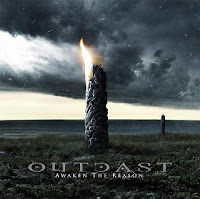 Awaken the Reason might not seem such a progressive long jump from its predecessor Self-Injected Reality, as much as that album was from Outcast's debut First Call/Last Warning. But it's easily another victory in the French band's repertoire, and proof positive that they're one of the absolute best acts evolving the mathematical, grooving 'djent' genre from its Swedish instigators Meshuggah. Granted, I understand that the use of 'djent' is often restricted to those younger bands that embrace it, but certainly the grooves on this album are representative of that style pioneered on albums like Destroy Erase Improve or Chaosphere, fashioned into jerky, seismic mutations of standard tempo chugging breakdowns. And though I'm sure the band get tired of the comparisons, I must also say that the harsher vocals of Wilfried Fagnon bear strong resemblance to Jens Kidman's percussive invective.

That said, Outcast are one of the few groups in my opinion that are actually 'forwarding' this sound through their application of jazzy, irradiating death/thrash leads and patterns that are even more complex than what the Swedes offer us at their most manic. There is almost always this richness of content compacted into each of the tracks, whether the bouncier maneuvers of "Elements" with its dissonant patois or the brief, spurious "A Solace from the Shade" which plays out like a hybrid of Fear Factory chorus climaxes and technical, surgical thrashing rhythms on par with bands like Theory in Practice as it lurches into its broken but intense math grooves. The leads are generally brief and insane, the band reluctant to gorge itself on its obvious musical prowess, but the real show are the brilliant picking and tapping pattens instated through pieces like the excellent "Fallen Years" (around the 3:00 minute mark) or the swerving yet melodic slugfest that is "Man's Last Failure". Even better, Awaken the Reason is strewn with interludes and breaks in the action which serve to pace it out better than similar albums that attempt an all out rhythmic onslaught on listeners.

"Awaken the Reason Pt. IV: When Dawn Brings Clarity" is a three and half minute instrumental featuring a prominent piano and some ambiance, while the opening tones of closer "Awaken the Reason Pt. XI: Reprise" and "Isolation" open with some dirty, resonant cleans. There is also the use of both deeper gutturals and more atmospheric vocal lines woven through the album to offer some respite from the prominent barking timbre, and these are managed quite well. As far as production, Awaken the Reason is pretty much in lockstep with most modern artists in the niche, with all the guitars and drums quite clear, and the bass set an appropriate lower angle which nudges its way easily towards the ears even if it's not so reactive and prominent as the higher tones. Ultimately, while I enjoyed Self-Injected Reality slightly more as a progressive step for the whole Meshuggah/Special Defects sound, Awaken the Reason does prove that its predecessor was no fluke. Outcast is one hell of a band, and though they're more complex than countrymen Gojira, I'd be stunned if they couldn't eventually reach that level of attention.
Verdict: Win [8.25/10]