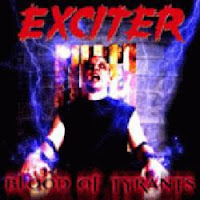 By the turn of the century, Exciter seemed to have at long last re-established a stable lineup and label relationship through French imprint Osmose Productions, and Blood of Tyrants, their 8th album, was the natural followup to The Dark Command that many were no doubt expecting, with that similar amped up speed/power metal hybrid centered around the dominant vocals of Jacques Bélanger. Sadly, I found this to be a mild dip in quality for the Canadians, one of those albums that might or not be aware of its own comic nature. For you see, while Bélanger retains that strong, higher pitch you come to expect from energetic, traditional trad/power metal front men, the constant grunting and 'evil' backups blend with his siren cries to cross the line from charisma to caricature.

Still a strong influence circa Harry Conklin (Jag Panzer), but here it seemed like Jacques was biting more directly from popular veterans like Rob Halford or Udo Dirkschneider. A lot of the lines seem like he's aping the escalating Halford pitch on intense songs like "Painkiller" or "All Guns Blazing" from the 1990 Painkiller album, while elsewhere in tracks such as "Martial Law" or "Blood of Tyrants" itself he sounds eerily similar to David Wayne or Udo, with that grating, post-AC/DC tone. In addition, there are a ton of backing gang shouts, grunts and goofy sounding evil, phlegm filled barks in tracks like "Metal Crusaders" that make the songs feel almost like a joke that no one but the band are in on. In other tunes like "Brutal Warning", it's the very high pitched shrieking lines themselves which seem like to simmer in their own unintentional humor. Not that Jacques has lost any of his edge, the guy can scream and sustain his attack at high volumes, but the arrangement might have been better managed to not seem so self-deprecating.

Otherwise, the album is quite similar to its predecessor, albeit a fraction more raw in terms of the production. The guitars don't feel so muscular as on The Dark Command, though the actual composition is comparable, with simple and frenzied chord structures driving the action and very little sense of subtlety to be found. Ricci beats you over the head repeatedly with his rhythm riffs and the frilly, chaotic solos found in pieces like "Rule With An Iron Fist" while the Charrons pound away mercilessly on the drums and bass like they were both yanked out of some thunder god's litter. You still get the signature Exciter variation, as the band rifles through both faster paced numbers and slower, Sabbath style rockers like "War Cry" or the churning "Predator", so I'd never describe the album as listless, boring or one-note like it might have been.

Alas, Blood of Tyrants is just one of those efforts which I'd categorize as 'amusing', but not very good. The guitars and vocals are bright, the latter perhaps too much so, and it often feels like what might occur if a group were making light of power metal. I realize that's not the intention, but it just goes for the balls too much, like Painkiller or Accept's 90s offerings Death Row or Predator if they were spiked on narcotic stimulants. Often a band will come along and perform this sort of Priest influenced, frenzied material and make it work, like Primal Fear's better material circa 1999-2002 or California's psychotic Cage, but here I felt the songs were more of a flexing of machismo and muscle than an actual thrill ride. I felt like I was choking back tears of horn-throwing laughter rather than digging the riffs. That said, if you deeply enjoy the solo material from Halford or U.D.O., or similar screaming fare, it's possible you'd get more mileage out of this than I did.

Verdict: Indifference [6/10] (the force of the molten mask)