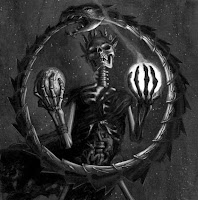 I was quite surprised to find that Connecticut's Morgirion was an unsigned act considering how visually appealing and professional this debut is. Its relative purism to traditional black metal aesthetics and thriving atmosphere are imbued with no shortage of subtleties and bleak aural expositions that hang on the edge of perception while the centrifugal force of the blasting and lower range tremolo riffing serve to anchor its aggression. Like the tatterdemalion osteomancer on its cover, wreathed in its bony ouroboros aura, the Infinite Retribution Upon Paradise juggles spheres of both darkness and light into an acerbic, harrowing architecture, as dynamic as it is destructive.

This is not an experience you're likely to squeeze into your next smoke break, because they've written quite a substantial amount of material spanning 65 minutes, about half of which has been culled from their 2009 demo Leave Nothing to Decay and reintegrated successfully alongside more recent compositions. With such a broad swath of content, I did feel that there were a few moments in which my attention did falter. These tended to coincide with sequences of straight on blasting black metal with familiar chord progressions redolent of Norwegian titans like the early 90s Mayhem or Immortal, or some of the barbaric, mid-paced Bathory riffing found in the bloated, 13+ minute finale "Inception Revoked". However, to Morgirion's credit, even these sections of the album don't destroy its flow thanks to the harried, fill-laden performance of the drummer Matt Jambard, as fine a player in this style as most I've heard from the East Coast; or the tortured echo of the vocals which resonate through the barrage of the guitars like the last gasps of a dying, shaggy predator dragging its bloodied hind legs through a dead winter night.

Where this trio excels, however, is when they incorporate the keys into the core instrumentation to create these twisted, almost psychedelic contrasts of grace and morbid mobility. Examples include the numbing spaced out pads deep in the bridge of "The Final Incantation" or the somber, synthesized breakdown of "Pyroclastic Warfare" with its shimmering, escalating progression that I must have gone back and replayed a dozen or more times already. Once the blasting, serpentine velocity of the drum and rhythm guitar is asserted over this passage, I felt that Morgirion was truly at its most inspired apex of poignant and potent force. I almost wish there were more such instances of balanced escapism, savagery and beauty intertwined, but then, they don't really make a poor showing of more distinctly brutal pieces like "An Ode to Fallen Cowards" with its mix of rasped and guttural vocals, and soothing, distant choir tones.

In addition, they are almost always add some subtler, layer of noise and dissonance through the thrust of the guitars, so even when Infinite Retribution... seems to thrust along closest to its Scandinavian forebears, there is something slightly more on offer than you might expect from a pure, carbon copy worship band. Even if I found some of its tracks more enthralling than others, the album is nonetheless an impressive enough debut that it warrants a recommendation to both the fan of atmospheric, mildly symphonic and traditional European black metal, and the current crop of cavernous death and black metal acts who harbor a similar, multidimensional attack. And what's more: Morgirion is another promising New England act alongside Infera Bruo, One Master and Autolatry which offers us locals a tasteful respite from our Puritan roots, pathetic Irish jock punk and spastic A.D.D. metalcore.
Verdict: Win [7.75/10]