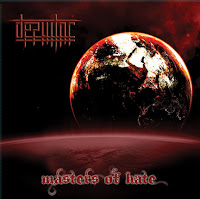 Swedish duo Desultor deal in such a balanced contrast of extremes that you have to wonder why a lot more bands haven't tried it, and Masters of Hate is the sort of debut which should rocket them into the radars of many modern enthusiasts. Formed in 2007 and drawn from members of lesser known acts like Auberon and Machinery, they write in a hybrid of aggressive death and thrash metal, but use a clean and charismatic style of vocals that would take you instantly unawares had you not had prior warning. Markus Joha, who is also the guitarist, has a timbre somewhere between Bruce Hall (late of Agent Steel), Urban Breed of Tad Morose and a few shreds of Warrel Dane's haunting psychosis, sans the screaming.

In fact, Nevermore is not a bad comparison towards Desultor overall, or those late 90s/early 'oughts Agent Steel records, only the first is more choppy and technical in its riffing and song structures and the latter clearly cast in a speed/power mold. Desultor are more about blowing you over with these brazen, textured floods of chords and tremolo picked guitars over tight and muscular drumming that very often accelerates into a pure blast beat. It's this extremity that will be sure to win over the younger crowds, since Masters of Hate almost never lets up with regards to its sheer force. There are segments of more progressive, melodic and slower guitars embedded in a number of the tracks (like "Black Monday" and "The Luxury of Pain"), usually surrounding the fulfilling lead sequences, but for most of the 34 minutes they are content with tearing us a new one, and they do so with a mechanical precision that is frightening.

About the only thing here that doesn't really stand out much is the bass, which is contributed by a guest musician; but not because you can't hear it barreling along in the mix, it's just impossible to consciously register it next to the vocals, drumming and corpulent guitar tone. The band is not afraid to incorporate more aggressive snarls and sneers where it suits the music, from a rasp to a more gruff tone, but these points never feel quite so distinctive as Joha's memorable, unique chorus patterns in tracks like "Division Insane" or the crazy "Caged". As I hinted, the leads here are quite well written, never unique or innovative but sure to sate fans of Jeff Loomis, Dave Mustaine or other comparable axe luminaries. Yet it's the rhythm guitar that really exacts the most emotional damage, from the insane matrix of tremolo hammering to the brighter spikes of clinical thrash that pepper "Denies", which is perhaps my favorite single track here.

All told, Masters of Hate is one of those albums capable of playing to a broad audience. Those into faster, modern power or thrash metal which sounds as if it escaped the 80s, the more aggressive melodeath acts out of Scandinavia (Darkane, etc), hell even people into the rather generic 'extreme' mutations you hear in the gimmick band Dethklok will appreciate the music (if not the vocals). But don't mistake Desultor for some shallow, emerging trend. They know just how to rein in their skills and keep control of their compositions. None of these explode past the 5 minute limit, and most are held to a respectable 3-4 minutes of ass kicking with few if any arbitrary indulgences. I found that it lost a layer or two of shine after a half dozen listens or so, the lyrics I've seen were rather bland, and I wouldn't brand a number of tracks unforgettable. However, it's talented, fun and fresh, and I have no doubt we'll be hearing a lot more from them once this starts to circulate.