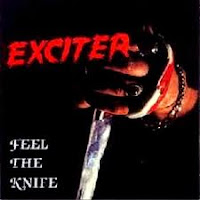 Feel the Knife is another of those short-form excesses of the 80s whose value is highly contingent on whether or not an individual meets a certain condition. In this case, if you own the versions of Long Live the Loud released in the year 2005 or beyond, then the EP is worthless. Dogshit. Grease. Vomit. Something you'd only seek out if you were a collector or completist. If you DO NOT own their third album, then this becomes more of a crap shoot. Certainly what the band has included here does not represent its best work, at far as the titular non album track, but neither is it anything to balk at, and the inclusion of two cuts recorded live in Ottawa (1984) gave many of us our first exposure to their stage capabilities.

"Feel the Knife" is more or less a song that feels as if it were recorded at the same time as those of Long Live the Loud, but for whatever reason, whether it was set aside for promotional and commercial purposes or just not good enough to overcome a sense of redundancy with its neighboring creations, it wound up here. Thick, pummeling speed metal with some competent if not memorable riffing and Dan Beehler's new focus on screaming out nearly all his lines. Like the full-length, Ricci's lead here shows a more seasoned burst of activity than the spurious passages strewn about Heavy Metal Maniac, but it also doesn't really distinguish itself beyond its blazing blues base and frenzied antipathy. In short: I don't really think this was worth basing an entire release around, and it might have served just as well on the intended full-length.

"Violence and Force" and "Pounding Metal", on the other hand, both being performed off the Violence & Force album, sound quite entertaining here, and I think I might even prefer Dan Beehler's vocals to their studio incarnations, as he seems far more sure of himself. Both were solid songs to begin with, and the levels here are quite strong, in particular the drums and guitar but the bass is also acceptably juicy. As a temptation to go see them live, it works rather well, and having seen them since (with later lineups) I can attest that they leave nothing to the imagination, simply rocking your face off like an industrial strength steel wool scrubber. That said, I will reiterate that tracking down the actual vinyl is best left to the hardcore collectors who I presume would either stare at it on their wall, pass it along or commit it a museum; for anyone else, who just wants to experience the material, it's a nice little bonus to Long Live the Loud but fails to really stand out on its own.

Verdict: Indifference [5/10] (just when you think you're safe)