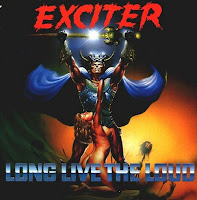 The fact that Long Live the Loud was released on Exciter's third label in as many years is a testament to the volatility of the industry during those important years of metal growth in the early through mid 80s. Granted, the Canadians seemed to be working their way ever upward, but never quite scoring that hit full-length that would pave the way for the ultimate opportunities that bands like Slayer, Metallica and Megadeth were snatching up alongside the more popular acts of the British invasion around the turn of the decade.

To my ears, though, Long Live the Loud has proven the most definitive of Exciter experiences, a puerile but focused rush of intensity that delivers the pure speed metal rush I so loved about bands of this period like Savage Grace, Razor, Lizzy Borden and so forth, with comparable high pitched vocals and testosterone to spare. It might lack some of the innocence of Heavy Metal Maniac or Violence & Force, and the band's enigmatic, switchblade wielding hesher mascot had been handed his walking papers in favor of a cheesy, Manowar-like fantasy misogyny (though the Feel No Knife EP offers a brief role reprisal) but musically this is the most fun I've ever had with one of their albums, and the first I'd recommend to anyone seeking them out for the first time, inching just past the sophomore.

Still a three-piece, with John Ricci, Alan Johnson and Dan Beehler returning, the most important change between this and Violence & Force is probably the vocal quality. Where Beehler had a previous tendency to shift between mid-ranged yelling and higher-pitched shrieks, the latter seem to have become the norm here, and he's become capable of sustaining that range for a longer period of time. He's still not got the mightiest pipes on the scene, falling below the high standards set by your Rob Halfords, Lizzy Bordens and such, and at times I feel as if they come off a little fragile or depthless when leveled against the powerful drums and guitars, or cater to the 'screaming at the top of my lungs' caricature many often apply to similar bands, but I found them far less distracting than the less than fine-tuned performance of the sophomore.

Musically, Long Live the Loud is well structured and just beats the shit out of you once the dust from the guitar driven intro "Fall Out" subsides. "Long Live the Loud" and "I Am the Beast" rip out some punk-fueled, classic speed circa Venom and Motörhead but with the added perks of the shrill, banshee-like wailing of Beehler and the strong support of the gang shouted backing vocals. The guitar tone is loud and grating, the impulsive velocity incessant, and the leads here burn with a spirit that surpasses the previous albums. In particular I love how they open "I Am the Beast" with just the guitar raging off and then the rhythm section bursting in while Dan goes absolutely insane. After that, "Victims of Sacrifice" and "Beyond the Gates of Doom" maintain the solid momentum of familiar but forceful riffing, stopping only for the eerie organ intro to the latter and some punishing drum breaks.

Having never gotten the chance to see this band during their early years (I was like 11 when this came out), I can only imagine what they might have been like with the original lineup on stage. Beehler is a monster on his kit. He might not be technically the most gifted drummer playing in the genre at the time, but the mix of the beats has a phenomenal balance of voluminous crashing and sheer bravado that reminds me of other scorchers like Lizzy Borden's Love Me to Pieces or Razor's Executioner's Song. What's even better, he never really lets up. The entire album is quite consistent in quality, and even the band's first attempt at a 'proper' epic (they had songs around 7 minutes before), "Wake Up Screaming" fills outs its 10 minutes of bulk with a mix of iron-wrought chords, bass grooves and bluesy, airy leads that howl off into the steaming city pavement of an urban summer night.

Some might lean towards Heavy Metal Maniac for setting Exciter's stylistic standard, but this album just reeks of confidence and ass kicking. It's not perfect: not every individual guitar progression stands out as insanely memorable, nor do the lyrics often avoid the old cliches that so many bands fell into, almost repeating one another. But it's not like these three gentlemen ever set up to write a symphony, just drag their influences into a louder and bolder new era of leather, spikes and sweat, and Long Live the Loud is another admirable contender for the short list of top speed/heavy metal exertions of 1985. I think that in the long term it might have been dwarfed by Razor's twin accomplishments Evil Invaders and Executioner's Song, the latter of which I think has catchier songwriting than this, but like it's two predecessors, this deserves a spot in the collection of any discriminating denim diehard.