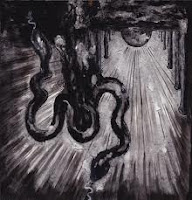 Two Serpents is one of those rare 'split' recordings which is actually more of a collaboration, and thus far more cohesive. Usually you'll get two distinct sounds on such an EP, bands connected through genre but not necessarily tone. Not the case here. Granted, Charnel Winds and Verge are two projects which share several members, making it easier to pull this material off 'in house', but the sound of these tracks is so rich and fascinating that it proves once more just how Finland is becoming a hotbed for novel, psychedelic sounds affixed to the skeletal frame of black metal's necrotic fundamentals. Perhaps not so broadly alien and atmospheric as Orannsi Pazuzu, or as raw a drudgery Pantheon of Blood (which also shares a mutual member with these two acts), but suitably engrossing.

The focus here, at least on the first two tracks, is a hypnotic balance of dark grooves circa the Ved Buens Ende style of writing and a sheen of dissonance which hangs on the edge of the listener's perception through faintly glossed, evil wailing chords. The vocals are a mix of your average, Horna-like rasping and deeper, almost Gothic cleans which very often reminded me of Root's Big Boss in his lower register. Right in the midst of the flowing, curving bass lines and haunting atmospheric apparitions of "Archons", they'll thunder into this more straightforward thrashing palm muted sequence and back again, creating this unsettling, creepy resilience. Or in "Serpent Tongue", they'll incorporate a more progressive, Middle Eastern sounding sense of harried, snaking melody that waltzes across the psyche like some candle-flame in a ritual.

The latter tracks on the EP are a bit more substantial at 6-7 minutes of length: "Wingless Dragon" with its bass driven, subterranean swell of ambiance and a bluesy lead that escalate into a sludgier sequence. "Godhead" is more of a traditional black metal tune with walls of chords, blast beats and the rasp serving as the central vocals, and for this reason, it was my least favorite on the collaboration (if not bad), simply because the others felt so much more involved, unique and interesting. Ultimately, though, the music combines with the oozing surreality of the inverse cover landscape and the diabolic, desolate lyrical imagery to create something fresh, fulfilling and oblique, neither exceedingly complicated or blunt and simplistic.

It's a little on the short side, and with no real exposure to the constituents' recent full-lengths Der Teufelsbund or Sex & Violence I had nothing to really compare it with, but nevertheless I would easily recommend this to fans of the artsy darkness of their countrymen Saturnian Mist or Misantropical Painforest, or the cerebral entropy of Ved Buens Ende/Virus or the Germans Secrets of the Moon.