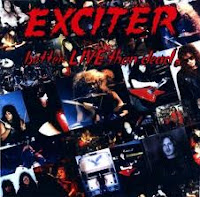 One of the things I've always appreciated most about Exciter is how unwilling they are to rip off their fans. Considering that they've got well over 30 years of history behind them, you'd think they might try to capitalize with dozens of live albums, useless 'greatest hits' compilations or other bullshit, but their arbitrary audio products have been incredibly sparse. One compilation of re-recorded tracks with a new lineup, one vinyl EP (which has been included with a re-issue of Long Live the Loud), and only one official live album to my knowledge. The rest: all studio full length albums. No fucking around, just new music whenever the creative bug bites them on their collective arses. I wish more bands would follow the pattern.

Better Live Than Dead is that sole live album, and while the Feel the Knife EP included a pair of appetite-wetting teasers, and Kill After Kill also had a bonus live track ("Born to Kill"), this is the real deal. Recorded in Canada, their home turf, in 1991, it includes 13 tracks exclusively drawn from the first three, classic albums: Heavy Metal Maniac, Violence & Force, and Long Live the Loud. In other words, all the material that actually would matter to the heavy metal connoisseur who might not be so keen on their prim and proper, gimped s/t (1988) or the more aggressive fare they would pursue after that (Kill After Kill and beyond). Originally released through a small label called Bleeding Hearts, it's quite difficult to find, but those interested will have better luck tracking down the superior Megaforce reissue which features the live version of "Born to Kill" and a video for "Rain of Terror" as bonus material.

No real problems with the set choices here, as they blaze through standards like "Heavy Metal Maniac", "Under Attack", "I Am the Beast", "Long Live the Loud", "Pounding Metal" and of course "Violence & Force", covering all the most notable basses. There are a few lulls in the set during "Delivering to the Master" or "Black Witch", the latter of which is one of my least faves from their early output, but Dan Beehler's vocal performance really ties it all together, more consistent at least than the studio sessions for Violence & Force. As for the audio quality, it's pretty raw and down to earth. The guitars and bass are roughly even with the drums and the slicing vocals, with just the one guitarist (Ricci) so the leads aren't supported by a second rhythm player. They were working with yet another in a long series of bassists here (Jeff MacDonald) who only appeared on this live album, but he does a decent job, and Beehler's drumming is like clockwork, always impressive as he's also the vocalist...

Not the greatest of live albums I've heard in this or any other metal sub-genre, but the track list is admirable and it's pretty much exactly what the doctor ordered. Don't expect a lot of variation from the studio incarnations of the songs: the leads are often tweaked but otherwise it's the same straight on, raucous speed metal with screaming vocals. Production isn't perfect, but suitably sincere to the sort of experience their music creates. Honest, filthy and straightforward, with little interest in subtlety or complexity, just fist mashing and hair tornadoes.