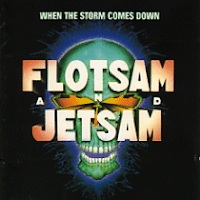 While Flotsam and Jetsam's relationship with Elektra Records was rather short-lived, they were fortunate enough to sign over to an imprint of comparable magnitude in MCA for its followup to No Place for Disgrace. I can remember this as being one of those 'make or break it' moments for a thrash band in the later 80s. They had the momentum, they had the musicians, and they were coming off a fan favorite debut and an even mightier sophomore, so When the Storm Comes Down was essentially projected to become the band's Master of Puppets, a goal that was sadly not met at all. This was met with a lukewarm at best reaction, and I'd say that, despite the band's continued slot on the rosters of decent labels, this was more or less the beginning of their sink back into obscurity...

Not that the music here sucks by any means, but there are certain faults in the production that do the rather adventurous writing little justice, and a few stupid songs that mar the remainder. I wasn't the hugest fan of the mix on the previous album (my favorite), and things seemed to only grow worse here, though arguably it falters in different ways. Erik A.K.'s stringy, melodic vocals feel too pinched and tinny in the mix, an unwelcome contrast against the meatier production of the rhythm guitars which were akin to ...And Justice for All or Persistence of Time. A lot of the curious little spikes of melody as in the verses to "6, Six, VI" just felt as if they were lingering far too much in the background, behind even A.K. in potency, and the funkiness of Troy Gregory's bass lines on this album, which show no lack of fluency and creativity, still came off rather flat. Not to mention that there was one song here, "No More Fun" which was a little too 'funky' for its own good, like Infectious Grooves or something and adjoined with goofy guitars and weird druggy lyrics alongside the bouncy pace. The drums are also just 'meh' in the mix.

On the other hand, there was no shortage here of decent and effective riffs that constructed themselves into some mildly memorable songs. Again, while I don't like the blaring funkiness of the bass tone in "The Master Sleeps", it's pretty well structured with those dense thrashing rhythm guitars and melodies that would thrill fans of mid to late 80s Metallica, Testament and so forth. "Suffer the Masses", while not a favorite, is definitely a well written mid paced head banger in which Knutson belted out stronger melodies, even if the backing vocals in the chorus were lackluster when leveraged against the soaring guitar lines. "Burned Device" is also a pretty solid performance from Eric over the glinted acoustics of the intro, and at 6 and a half minutes it has a lot going for it, while pieces like "October Thorns" and "E.M.T.E.K." are also effectively incendiary and show some thought in their own architecture.

However, even these are not quite good enough to scale to the summit of excellent achieved with "No Place for Disgrace", "Hammerhead", or the rebellious "Hard On You", and unlike the second album, I found that one shed a bit of its resonance with subsequent listens. Not to mention that "No More Fun" is a hands down dumb idea, and the closer "K.A.B.", one of those dorky acronym tunes from the 80s which is like 28 seconds of repeating the same vocal line 'Kill all bastards' is neither interesting or particularly humorous. It should be an unwritten law that you can not feature two acronym songs on your album! But beyond that, When the Storm Comes Down is too clean, and too polished in general, and the nasal vocals and imbalance of muscular thrash riffs and melodies really threw me off and continues to do so over 20 years later. Fans of the more progressive West Coast speed/thrash records like Heathen's sophomore Victims of Deception or Mordred's first two efforts Fool's Game and In This Life might want to check this out for its comparable creativity and tone, but for myself this was the opening chapter in a long stretch of mediocrity from a band I had very high hopes for.
Verdict: Indifference [6.75/10] (our time slips away)