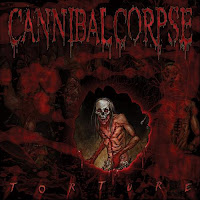 There's a strange cycle I often see in metal press, especially reviews and promotions in which the stars will align and suddenly everyone will greet some new release with exclamations like 'This is the best (insert popular band name) album since (insert the name of some high profile cult classic)' or 'Finally, a return to form!', when in truth many of those same people were never paying attention to what was happening in the meantime, dismissing a lot of what might be great music they would have enjoyed in blissful, willful ignorance. This is very often the case for a band who have an important lineup change at some point, probably the singer, and I feel it's true for the mighty Cannibal Corpse, who have endured enormous resistance on the brutal fishing rod since Corpsegrinder took over from the divisive Chris Barnes.

So it's no surprise that lately I've seen the new Corpse album Torture touted with such a huge swath of misinformed praise. It's the greatest thing they've written since The Bleeding! It's the first Cannibal Corpse album with George that doesn't suck! It's a return to the fundamentals that made them such a great band in the first place! Bullshit, maggots. It must be lovely to selectively ignore reality. Have you had excess wax in your ears all this time? Are squirrels storing acorns in there? Maybe you left those plugs in after that loud gig in 1996, and they've become ingrown? Now, I'm not trying to knock Torture. It's a fine record, and a lot of damned fun in the Cannibal Corpse tradition, but there is nothing here that wasn't already present on the last 5-6 albums and in fact the songs themselves don't hold the same level of intense thrills for me that I found on Evisceration Plague (2009), Gallery of Suicide (1998) or the incredible and unforgettable Bloodthirst which I hold up today as one of my favorite USDM albums to date.

Torture is business as usual, no doubt, but it just happens that the business of Cannibal Corpse is to beat the everliving shit of you, and considering the band's age relative to the many younger acts constantly sprouting up in the brutal death or old school niches, it's impressive that they are still capable of so much boundless energy. The rhythm section here is incredible, Paul Mazurkiewicz battering away like he were a 19 year old who just snorted some a few lines before hitting the studio, and Alex Webster's bass-lines are as thick, acrobatic and uncompromising as ever: basically the blueprint for the low-end adept who doesn't wish to be known for serving as mere support for the guitars. Barrett and O'Brien carve out about a million riffs on this thing: whether they be old school tremolo bursts, thrashing palm muted frenzies, zombie grooves or grinding hybrids of the three, there is always something happening, and Corpsegrinder's blunt and percussive delivery binds it all into a vortex of pummeling force.

The production is comparable to the last two albums, only mildly more bassy, rounded and down to earth, less cutting in the lead sequences. Pacing is superb, with a pair of blitz abominations up front ("Demented Aggression" and "Sarcophagic Frenzy") that lead into the neanderthal groove and swagger of "Scourge of Iron". Favorites for me are definitely "Followed Home then Killed" which has an amazing, surgical thrashing flow to its guitar progressions that is among the best the band have written in the past decade, or "The Strangulation Choir" which plays with a lot of spiking dynamics and a level of measured complexity that proves once again these guys are one of the better semi-technical outfits in the genre who never go quite overboard in any crass attempt to impress anyone. Other meaty, meandering matrices of mosh include "Intestinal Crank", "Crucifier Avenged", "Caged...Contorted" and the spurious, psycho finale "Rabid".

If anything, I hope this album will finally silence the doubters who have for years been criticizing the band as some sort of faceless, generic death metal band. For fuck's sake, Cannibal Corpse helped to create and mold the entire scene, so it's to their absolute credit that they've never really allowed it to outpace them. Torture is quality, and consistency, and possesses the same level of personality as KILL or Evisceration Plague or any of their great albums. A few of the songs here will easily make it into their set list and remain there for years to come. About the worst I could say for the album would be that it was 'more of the same', but that really only serves as a detriment when the 'same' is not about to break my neck and then make me lie paralyzed and helpless while it devours my wife, children, neighbors, and mailman. And that's good enough for me.