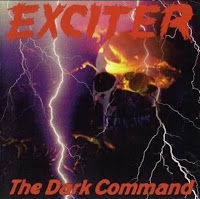 The Dark Command arrived after an even greater gulf in time than that between Exciter (O.T.T.) and Kill After Kill, and with it a new wealth of changes to both the roster and sound of the band. John Ricci and Dan Beehler had parted ways once more, only this time it was Ricci who would carry on Exciter with the entirely new lineup of Marc and Rik Charron (on bass and drums respectively), and the charismatic siren Jacques Bélanger taking up the mantle of screamer. From Noise, the Canadians had moved over to another European label for this record, Osmose Productions, once again making their career seem like a tour de force of many of the genre's heavily involved imprints, great and small and some now defunct.

The first major difference between this album and their prior output was the sheer weight of the production. Never had Ricci achieved such a corpulent, voluminous guitar tone, and even though he's playing the same sort of riffs he'd been crafting over a decade before this, they automatically sound darker, heavier and more menacing. It's difficult to think they'd go in a direction more aggressive than Kill After Kill, but that is precisely what transpired and they didn't make a poor show of it. Bélanger was also a far more brash and varied vocalist than Beehler: maybe lacking that old, scathing immaturity that gave the classic Exciter records so much character, but supplanting it with a presence that could fire shot for shot against a lot of the power metal divas of the 90s. Certainly there's a hint of Halford, Dickinson and Dio in there, but I'd more closely compare Jacques to Harry 'Tyrant' Conklin of Jag Panzer and Satan's Host, with perhaps a dash of Tony Taylor who had fronted Twisted Tower Dire for a time, and some Eric Adams of Manowar in his mid range sneer.

So, considering these changes, it's not a surprise that The Dark Command veers off into a more speed/power metal direction that its predecessors, placing it snugly within the popular European power metal scene sans the cornier Helloween-influenced anthems and keyboards. Still a band who just wanted to kick your teeth in, not reproduce a lot of studio tricks or gimmicks, and this ideology is enforced by Bélanger's dynamic approach to the vocals, which alternated between carefully leveled screams and even some near-guttural vocals in tracks like "Aggressor" and "The Dark Command". There's a bit more low end muted chugging here redolent of a thrash influence, found in something like "Ritual Death", and the solid punk-derived chord patterns that Ricci implements are far more 'evil' sounding. As sacrilegious as it might seem, this is speed metal that you can actually mosh to, with thick bass and thundering drums that compensate for the simplicity of the riff progressions.

Think back on how Rob Halford sort of 're-invented' his Priest roots with the denser, modernized solo albums like Resurrection. This is quite similar, only Exciter did it first, and maybe not as well. There are some great vocal lines in the writhing, forceful "Burn at the Stake", and songs like "Executioner", "Screams from the Gallows" and "Assassins in Rage" to which it's nigh impossible to remain still. But I wasn't left with a major impression or a lot of replay value over time. It's a fun album to listen through when you're in the mood, but there are few guitar riffs I'd dub truly memorable, and as much effort as Jacques clearly put into his debut performance here, nothing resonates with me like, say, any of the title tracks off the first three albums. Still, Exciter gets credit for 'updating' its core aesthetics in a legit matter, and this was a sound bred to aid the band's survival, freshen its pedigree and keep it both on the road and in the hearts and minds of the diminished speed/power fandom of the 90s, surrounded as it was by rapcore, neo-grunge and other bullshit no one really cares about anymore.