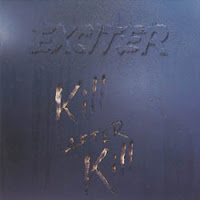 Four years can make a lot of difference in anyone's life. One could, theoretically, acquire a high school diploma or four year university degree, assuming one doesn't slack off. One could serve one or more tours of duty overseas, or observe an infant grow from a whining lump of diaper-mud and squinted tears to a walking, talking member of your civilization. As for the Canadian speed metal outfit Exciter, they would endure both a tumultous decay and a phoenix-like rebirth. Kill After Kill is pretty much a 180 degree turn from its self-titled predecessor, and a welcome one, with the band's progenitors Dan Beehler and John Ricci reuniting and returning to the sound that built their following through the first three albums.

It's not quite a complete 'reunion', mind you, since original bassist Alan Johnson had departed and been replaced by David Ledden, who, coincidentally, was once a member of the same Crypt that Rob Malnati (who contributed vocals to the Exciter s/t in 1988) had hailed from. Like it's predecessor, the cover here is quite dull and understated, just a logo carved into a background with the clawed look of the original Howling film posters. Only in the 80s, right? Wrong. Exciter had moved on to yet another record label, this time the excellent Noise Records out of Europe, and it proved an interesting pairing, likely due to their larger following overseas. However, I'm not sure if the band's heavier direction here had anything to do with the signing, so that they might fit in better with their more aggressive label mates, but one thing is clear: Kill After Kill was the most aggressive Exciter record to its day, ramping up the momentum of Long Live the Loud and Violence & Force with a more lethal, nearly thrashing undercurrent.

Right away, with "Rain of Terror" you'll note the more grinding, brutal guitar tone which would not have seemed out of place on an early record by Sodom, Tankard or Kreator. However, the actual songwriting is quite similar to the Canadians' past speed metal classics, with huge punk rhythms, pummeling bass lines and a muscular framework courtesy of Dan Beehler's pounding. His vocals retain a lot of their screaming timbre, but there are songs like "No Life No Future" where he returns more to the mid-range that was dominant on Heavy Metal Maniac. That said, you won't get the uneven distribution of energy that flawed the vocals on Violence & Force, Dan is pretty much spot on throughout the whole record. Some of the screams in tunes like "Cold Blooded Murder" are among the best he's ever evoked, and in general I found the delivery superior to the work of BOTH singers on the previous album.

Kind of like how England's Raven dialed up their meanness for their 1988 album Nothing Exceeds like Excess, Exciter had really reached a new edge. Whether they're plodding along with a slower sureness in "Shadow of the Cross" or frenzied speed/punk metal in "Dog Eat Dog" and "Anger, Hate and Destruction" they were firing off on all cylinders and clearly having a damn good time doing so. This was not a duo you wanted to meet in a dark alley in Ottawa for a fist fight after a drunk streak, because you'd find yourself brass knuckled and broken bottled until bruised and bleeding into the pavement and brickwork. But at the same time, I wouldn't place this in the 'essentials' portion of the Exciter canon. The riffs are decent, but nothing special, and while angrier than Violence & Force or Long Live the Loud, I feel it lacks some of the charm that burned those both into my memory. However, considering this is the last time Beehler and Ricci would be appearing together on a studio album, it delivers what its predecessor did not: a speed metal boot to the posterior.