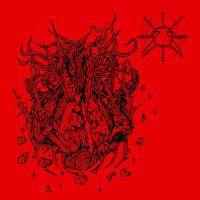 First heard of ZOM a couple years ago when folks were buzzing over their demo, and admittedly there's a certain novelty to the fact that they hail from Dublin, Ireland. Not the first place one thinks of when mentally referencing hotbeds of ugly, harrowing, old school death metal darkness, but this particular trio is obviously not privy to such generalizations, since they evoke one of the most wretched and entertaining sounds I've heard in this entire 'return to the roots' movement so popular in the past five years. Fusing together elements of raw black and death metal with an occasional death/doom sense of motion, I can only imagine that the  Multiversal Holocaust 7" EP resembles the sound of the devil in the throes of a terribly painful bowel movement. You might think I mean that as some sort of 'slight', but no, in fact, I think this is quite genuinely fucking awesome. ZOM throws all sense of intricacy, caution and taste to the wind, and it blows back septic, sulfurous and eminently rotten.

The title track ranges from ritual, dark intro ambiance, to a noisy, blasting epileptic seizure, to a morass of monolithic, dreary crushing doom over which a searing, depressive melody ranges, like watching cattle graze on some fiery plain of Hell. They even bust out a monstrous, roiling thrash passage near the close of the tune (and another in "Terror of the Cosmos"). Guitars have a tone the consistency leprous, festering flesh, while the bass lines are so corrosive that they could probably cleanse the nastier tile grout on your bathroom floor. Drums manifest a steady, crashing diatribe that functions beautifully alongside the genuine rawness of the riff progressions, and the vocals here are like a mixture of Martin van Drunen's coarse, grotesque guttural sustain with fits of unintelligible raving that reminded me of early filth-grind like Napalm Death's Scum, or some of the most suicidal post-Burzum black metal you can imagine. In fact, it wouldn't be out of the realm of possibility to imagine the creators of this limiting their influences to that record, as well as the early works of Autopsy, Nihilist, Repulsion, Slayer, Possessed, Asphyx and Carcass. Nothing here sounds as if it was conceived past maybe 1991-2, with the exception of the vast, tumultous vocal mix with loads of reverb echoing out over the primal foundation.

Granted, there are only two tracks here, being a 7", and a few folks might already have them from the extremely limited demo they handed out last year, but not a second goes past on this EP in which I don't feel genuinely terrified, or at least as shaken as this style is going to get me being that I'm no longer 12.  I can't also claim that the individual components of the sound are also that original or perfect, whether being the choices in production or the riffing choices. Yet the way it all comes together like the mismatched limbs of a composite corpse in some Frankenstein lab definitely feels fresh and revitalized despite its hideous throwback stench. Few such younger bands are capable of such ugly songwriting that manages to retain itself in the listener's memory, even without the presence of novel melodies or terribly impressive riffs, but ZOM is so meticulously balanced on the precipice of revulsion and control that I just can't get enough of these songs. A win for Iron Bonehead Productions and for anyone who enjoys a whiff of a freshly opened tomb or unearthed grave. Death and puke forever.