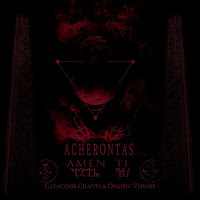 Acherontas is a band which has always gone out of its way to create the most ritualistic, mystic atmosphere possible in Greek black metal, or rather, in all European black metal. Whether this has been achieved through a sweeping brush of orchestration or a more tribal focus is not really in question: either way, when you're going into one of the group's new efforts, your in just as much for the non-metal aesthetics as you are for the tremolo picked guitars and ghastly vocals which buffet the listener like dragon wings. Never has this been the case more so than their latest album, Amenti - Ψαλμοί Αίματος και Αστρικά Οράματα (Catacomb Chants & Oneiric Visions), a substantial, hour plus collection of ideas and layers that occasionally had me riveted.

Seriously, half the album felt like raging against the heavens to the more traditional, Scandinavian styled riffs and pacing; and the other was like sitting in some exotic bazaar two thousand years ago with Dead Can Dance providing the soundtrack. Though they've always been pretty good (especially on Theosis in 2010), Acherontas have never been monsters at concocting the stickiest of guitar progressions; and that has not changed with this, but honestly there is so much happening at any given moment that you're unlikely to lament this omission for long. From simple, churning background chords to lighter, grooving bass lines, bells and other percussion, a panoply of growls, snarls and screams...numerous periods of chanting at the foreground and behind, rhythmic percussion which arrives sauteed in the haze of hashish or incense...to the textured and transient melodic eruptions which cascade about the dingy ceiling of the recording, there has been no effort spared in creating a complex (if not complicated) experience that you can pick through numerous times and not have fixated on every individual element.

But the Greeks avoid the calamitous potential such a broadly orchestrated, instrumented might evoke, so that they maintain a consistent, occult exoticism whether firing on all cylinders at the heart of "Set Triumphant - Nubti" or fully immersing themselves into the ancient, Eastern-flavored escapism of "Wines of Blood & Pestilence", with its caravan strings and escalating choir chants that provide what must be one of the most engrossing experiences I've ever had with an Acherontas record. Luckily, segues like this are common enough that you don't feel robbed, or that any one in particular does not stick out against the heavier tunes like a deer in the headlights, which so often happens on albums which incorporate an ethnic, ambient or experimental piece. Plenty to be had here, beyond just the usual into and outro, and never once did I feel like the writing was too cluttered...there aren't too many cooks in this kitchen.

To top it off, while the different tones and levels are hardly bold or brazen, everything is mixed meticulously so you won't miss out on the details. Bass is smooth, drums steady, nimble and potent, and the guitar melodies and harmonies are given just as much of a push as the rhythm guitars. I can't say that a lot of the metal riffs would be quite distinct if peeled apart from the other instruments or the myriad vocals, but they do not really need to be, since they add to rather than subtract from the exotic context of the mythic and black magickal themes of the lyrics. Exquisite but menacing. Whether your poisons include Septic Flesh, Hollenthon, Melechech or earlier Emperor, Rotting Christ and Old Man's Child, this is worth hearing, especially if you enjoyed the previous outing, Vamachara. Actually, I took away more from this than even Theosis, my previous favorite of their catalog.