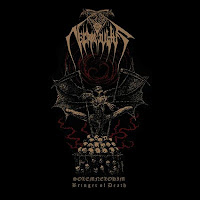 Hidden away from most eyes and ears, the Mexican metal region has strung together quite a thrifty little old school death metal scene, with acts like Denial and Zombiefication releasing some worthwhile output in Catacombs of the Grotesque & At the Caves of Eternal respectively. But a few years earlier, there was already an act plying the tepid morass of early 90s atrocity, and that was Necroccultus, whose ranks are in fact strengthened by members of a number of other underground bands from that scene, including a couple of guys from Denial. Solemnelohim, Bringer of Death is not my first brush with the outfit, as I've got some vague recollections of their 2005 full-length Encircling the Mysterious Necrorevelation. What a title, right, because EVERYTHING works better with a necroprefix. See what I mean? Anyway, this latest EP through Blood Harvest has to be one of the most straightforward, down to earth examples of necroretro death metal you're going to hear anytime soon, and considering just how popular the stuff lately, should win them some new fans.

Definitely conjured recollections of the first few Incantation records, only with a more muscular guitar tone, and vocals that are less abyssal, cavernous and unnerving. And when I say 'muscular', I mean that the amps sound like they're about to bust open under the strain of the chords. Most of the material is either molded into steady, mid-paced tremolo guitars that are either muted or writhing open, but they'll occasionally snap off into a solid blast beat, or a seriously weird and evil groove slightly reminiscent of Demilich. The vocals have a dense, bloody brutishness to them which is not exactly dynamic, but rings out like a pastiche of all your favorite death metal front men from the 90s (Benton, Reifert, Dolan, Vincent, Willetts, Pillard, etc). Drums are a bit poppy sounding, especially against the churning necrobulk of the rhythm guitars, but you can still distinguish them through the speakers. Same could be said for the bass, which blends in all too smoothly with the rhythm guitars to stand against them unless you can hear the fuzzy lines alone (like where they hit a few notes in "Aeons of Spectral Morbidity"). But hey, at least the rhythm guitars sound fat and festering, and the frightening, uncontrolled leads that rip off into the atmosphere add a nice ghoulish necrotouch to the proceedings.

I was impressed by the note selection in the first tune here ("Dimensions of Necromancy"), which is also the strongest, since it played with familiar patterns by imbuing some interesting necrolines, but the further I went into the 4 cuts and 20 minutes, the less impressed I became. It's all very consistent in style, but perhaps too much so, and it becomes a bit difficult to pick out much individuality beyond those messy, cemetery necroleads. The last tune "The Equinox of Unburied Ones" had some cool, down shifted 'narrative' vocals that added a nice chill alongside the growling, but other than that this is all straight-to-the-face-with-a-graveyard-spade, wretched death metal that aesthetically, beyond the voluminous production values, tends to ignore any and all developments in the genre over the last 20 years. Which is exactly why some folks are going to love the shit out of it, but I came off thinking it decent yet unable to hold my attention for very long. At any rate, if an unholy union between Incantation, Bolt Thrower, Autopsy, Demilich and Blessed Are the Sick era Morbid Angel sounds necrodelicious, then give these guys a necrotasting. Their music, I mean.