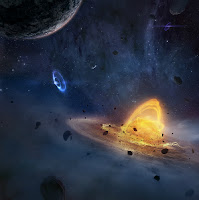 There certainly exists a pantheon of 'great' split recordings throughout the expanded metalverse, but normally the format presents me with a bit of a quandary. Are these just two or more bands of the same genre being haphazardly slapped together? Because they are friends? Pen pals? Are they covering one another? Was this just a label's idea with a few favors being called in? It's not really my favorite means of ingesting music, but once in a while there will come a team-up which seeks to further the medium by providing a cohesive and consistent experience that feels more like a direct collaboration, and Sol is just such an experience, a dramatic and emotionally ebullient immersion into cosmic, atmospheric black metal that persists for 70 fucking minutes...

I was actually familiar going into this recording with both of the constituent artists. Spectral Lore's latest full-length Sentinel was a game changer among Greek black metal works, and though my reaction to Mare Cognitum's sophomore An Extraconscious Lucidity was more reserved, I still appreciated the potential here for a usurper to the ambient/black throne of fellow Californians Leviathan and Xasthur. Both are one man acts, which might have helped them ease this into a singular experience; for while you'll pick up a few of the distinct traits of each artist, they've done a superb job here of unifying their songwriting into a seamless expression of otherworldly resonance interjected with spurts of incendiary metallic techniques like blast beats, wretched star-extinguishing snarls and roiling, tremolo picked rhythm guitars which do not belie their Scandinavian influences (Emperor, etc). Synthesizers and soundscapes are in abundance, as one might have predicted, and they're used for both melodic lines to enhance the other instruments, and cosmic waves of careening harmony that thrive on their lonesome.

What I found interesting was the sequence here, with each act contributing a nearly 30 minute track, and then pairing up for shorter, purely ambient finale "Red Giant" which is structurally the simplest of the three, but no less poignant or brilliant. "Ouroboros" and "Medius" each have a lot more dynamic architecture to them, and are quite intimidating, but it was this last, soothing track that truly gelled over the experience. That said, both Jacob and Ayloss prove themselves independent forces with myriad instrumental skills, shifting riff formations that mirror their respective solo works. "Ouroboros" is slightly more substantial, with wider contrasts of calm and intensity that fluctuate between black and death metal progressions; while "Medius" has a lot more of that harmonic discharge and raw intensity to the guitars which is redolent of Sentinel, though undeniable a more ambitious format. The production felt a little cleaner for the first tune, but apart from that it would be impossible to choose a favorite, since they complement one another so well...like stars streaking in tandem through a nebula of loss and regret.

Admittedly, not all of the individual riffs were that inspirational, which is why it is so crucial that they balanced in the clouds of murk and void atmosphere; but there were certainly some uplifting moments in which the guitars, vocals and arrangements erupted into a glorious crescendo like an astral leviathan rising out of some spiral galaxy. Star-whales striding the space-lanes, mother fucker! The compositions aren't quite so nihilistic as something like Darkspace, instead balancing a brightness or celestial bodies against the suffocating vacuum between them, but that's exactly why I enjoyed this so much, because at each intersection I could never guess precisely where the floods of notes were going, and its held up for over four full listens as of this review, a laborious love letter to a universe which will has birthed us as surely as it will crush us.