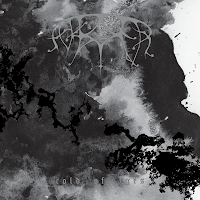 After the considerable raving hype I had experienced for Ash Borer's eponymous 2011 debut, I have to say that the final product I listened to was quite underwhelming. While appreciating the meditative quality of the Californians' music, there often seemed to little by way of ideas to fill out the large space occupied by a couple of the songs; and the riffing progressions were really quite bland, even if they successfully conveyed the heavily atmospheric intentions of the quartet. As it turned out, ash boring was...rather boring, but hardly something to foist a lot of grief upon, since there was clearly a vision underlying the sounds and themes that, with further gestation, was bound to evoke something poignant. Sure enough, enter Cold of Ages, the sophomore outing, and already the rougher edges were being smoothed over, the note selection of the largely tremolo based riffing superior, and the ambient passages and noise experimentation more transcendent and engrossing.

That's not to say that I love this album, but it's certainly one of those cases where I admire the consistency and craftsmanship on exhibition. The pacing and construction, for example, of how they build "Descended Lamentations" from a miasma of solemn ambiance and depressive, repetitive clean guitar plucking to a rush of dissonant, crud-encased chords and then even some slower, doom-spawned harmonies in its depths. Or "Convict All Flesh", the 18+ minute piece which opens with similar, sluggish doom guitars and a convocation of snarls and rising ethereal background swells to another fit of corrosive, moderately blasted mayhem. I was a bit letdown again that the quality of these epics played out in a very plane-like nature, where repetition and lack of climactic transitions led to an expanse of flat emotions that were so rarely exciting or anomalous. The architecture is quite predictable and typically shifts between two tempos. But there's enough atmosphere and fine tuning that I never feel groggy or completely uninterested in what's coming next. There are more riffs to experience throughout, and the quality has been tweaked so that about 50% of them are actually interesting, though often looped around a few measures too much for my liking.

Scandinavian-styled progressions, with a bit more Sweden than Norway in the melody department, are measured off against feeds of rougher discord, or majestic lamentation. Clearly there's a hint of the until recently trending 'blackgaze' or post-rock to some of the woozier guitar lines, but I was surprised at just how 'traditional' much of the writing felt, as if it wouldn't have been out of place in the second-third waves of the early through mid 90s. The drumming is efficient enough through the tunneling double bass patterns and the steady snares, but I didn't find a lot of character there, almost as if the beats were too subordinate to the whole idea of an existential meditation rather than the vicious intensity we so often find in the genre. The bass guitars are seeped in appropriate ooze, but yet often just wailing away in a tremolo pattern that sacrifices the possibility of further expanding the music's melodic dimensions for pure, anchored texture. Interestingly, the vocals are quite sparse in terms of syllabic delivery. Very often, they're used as just another instrument which grinds off against the nihilistic gray nebula Ash Borer inhabits, but then again, I cannot imagine another style being used here aside from the standard, gnarled rasp.

All told, even if there were a number of minutes where I would find myself checking the clock, I found that I was able to develop a stronger relationship to Cold of Ages than its predecessor. Just not to the extent that I'd flag it to friends as 'you've GOT to hear this', or that I'd reach for it over countless hundreds of other black metal efforts that are more entertaining, revelatory or abusive. The songs are quite long and some might argue 'pretentious' for the number of interesting twists and turns they actually deliver, but if you constantly find yourself with 60+ minutes to kill, you can get lost in its bleak cosmos for a spell; which I'm sure is the point of the thing. Decent US black metal which is likely to appeal to fans of other, like minded 'Cascadian' artists (Agalloch, WITTR). A little less dynamic, maybe, but it beats the hell out of the janky and disjointed diuretics of frustrating groups like Liturgy or Krallice, who only ever feel 'half on' at best.