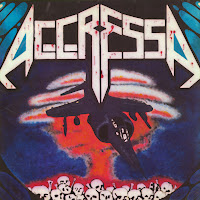 Australian metal in the 80s is somewhat of a gray area for me, being familiar only with some of the most popular acts, and even then, my knowledge of anything before the extreme metal down under outbreak of the 90s is hazy at best. So hearing Aggressa's Nuclear Death EP after about 25 years of blissful ignorance should have been something of a celebration, with a bottle of expensive whiskey and an evening of banging my fat head into unconsciousness. Instead, it wound up rating only one cold beer at best, and a cheap one at that. Decidedly average and dirty heavy/speed metal with a pretty bland riffing selection, the only true strength ironically being the lack of polished production to the rhythm guitars, and the more aggressive barking of the vocalist (in particular on "Voo Doo Doll" where it reaches a wretched rasp along to the more thrashing/speed riffs), which often hints that the band was headed in a more extreme direction, but the music hadn't exactly caught up.

The darker Aggressa gets, the better the results, but unfortunately the verse riffs to cuts like "Break Down the Walls" or "Torture and Pain" feel like your standard British fare circa Priest, Venom and Motörhead had already mastered well before this. Mid-paced stuff with some lighter palm muted picking that will then erupt into a more punkish chord anthem, but I can't say there was a single series of notes here that in any way surprised me or had me drooling to listen further. The leads are frivolous, noisy middle fingers that arrive unceremoniously where you'd expect them. There's a particular charm to the lewd and churning tone with its primitive distortion levels, and the singer's angry enough to pull off his own charisma, coming off with a bit of punk/crossover/splatter vibe. But you're just not getting the sort of memorable chorus patterns you'd expect from this period. Kind of a bar band atmosphere being created; sure, you'd look up from the bottom of your cup/misery, and perhaps even throw the blokes the horns, but it's not about to replace Kill 'Em All or Sign of the Hammer in your stereo, or even make it onto your stereo. The drums are ratty and crashy sounding, the bass lines rarely interesting even when bouncing along on their own (the intro to the "Phantom Stage Diver"), and both contribute to this sort of 'diamond in the rough, OF the rough' mentality popular in today's underground, where people are constantly trying to unearth more underground materials like this.

It's a bit meaner sounding than the average commercial/trending radio metal of the day, and has more in common with Canadian groups like Exciter or Piledriver musically than Quiet Riot or the Scorpions, but most of the guitars still seem pretty familiar even for '88. I also have to say, even if the bonus demo versions included with the Nuclear Death EP are even filthier and cruder in production, they benefit from a more vivacious, DIY atmosphere to the extent that I preferred them. "Religious Bloodshed", which is likely the most entertaining and smile-inducing tune on the release, with some whacky higher pitched vocals breaking out in the chorus and easily the best guitar riffs, also wasn't part of the EP, so I'm glad they threw that on here as a bonus. Ultimately, though, too many of the tracks suffered from stale riffing. There's certainly a core audience of rare metal connoisseurs and rabid Metalucifer/Abigail fanatics who will eat this shit alive, but aside from its attitude and obscurity, this just wasn't the sharpest tool in the shed musically, which might be why I'd never heard of it. I warmed up a few times to the rawness of the spectacle, but the songs themselves just didn't hook me.