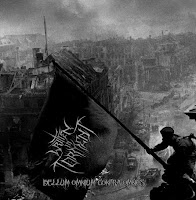 It's about as subtle as a construction crew haphazardly tearing up the sidewalk outside your flat, but what won me over with Written in Torment's full-debut was the very hypnotic quality of the riffs being carved out of the rhythm guitars. Not by any means unique for the black metal genre, but delivered with such force and conviction that they can transform what might otherwise seem like a vapid plain of blast beats into something more transitive and atmospheric, especially when engineer Johnny Maudling (Bal-Sagoth) contributes some keyboard orchestration that opens another dimension of melody and texture. But that's not the sole strength of this record; multi-instrumentalist Leviathan also doesn't shy away from the incorporation of glorious lead harmonies, pianos, and slower paced sequences ("Eternities of Suffering Endured") that grant the songwriting some much needed variation.

Ultimately, it's original enough that you can't exactly trace it to any one particular influence. In a few of the more mesmerizing floods of tremolo picked guitars ("Earth Decimated") I was reminded of how the German band Endstille chooses its notes, wherein other places there's this all-out attack on the strings redolent of fellow Englishmen Akercocke. Structurally the speed of the music hails from the Scandinavian playbook, but a lot of the riffing progressions don't carry that same feel for melody, especially when the focus is on areas like tapping melodies and dissonance ("O'Fortuna" being a prime example). I'd say a good half of the riffs are stock standard for the genre (like about half of "A Pig Hung in Golgotha"), but there's usually something more interesting waiting in the wings of each of the ten tunes, and considering that they're generally 5-8 minutes in length, I think the author does a fine job of filling them out without truly the dull repetition cycles manifesting through a lot of over-inflated underground black metal. Interestingly enough, the guy's primary instrument was the drums, which you'd hardly be able to tell here, because the guitars are the strongest component.

The bass lines aren't always so interesting, but often enough they'll stray a little from the rhythm guitar. Drums are intense and you get a good punch from the kicks, however I feel like during the blasted sections they can grow a fraction tedious. As for Leviathan's vocals, they're not so much an impish rasp as a drier, brute bark using more of the throat for a weapon, with some grisly sustained lines. Keyboards are tastefully positioned to never intrude or overpower the other instruments; nowhere near as pronounced and important as you'd find on a Bal-Sagoth effort, but you can still make out Maudling's knack for grandeur. The lyrics are more or less a tour of warfare through the centuries, rounded out by some good ol' black metal blasphemy. All told, Written in Torment is another of those projects that comes along and impresses, even if it's not out to revolutionize its medium. The production is clean, Leviathan is a great player, and those who have been heavy on melodic aesthetics since groups like Dissection twined them into their savage architecture will quite enjoy Bellum Omnium Contra Omnes (The War of All Against All) for its studied balance of trampling momentum and triumphant atmosphere.