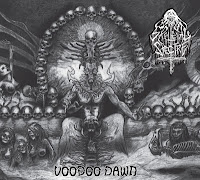 The reason Voodoo Dawn is so fun is because the album sounds like someone picked through a CD rack, took out all those doom/death classics through the 90s that I so much enjoyed, crushed all of their individual aesthetics into one unwholesome whole, and then hired on America's First Lady of The Festering Vanessa Nocera to growl bloody fucking murder over them. The only exception might be that they left out some of those duller, mournful My Dying Bride style progressions and went more for an outright, rocking formation on a larger portion of the material. Having already heard, covered and enjoyed the first two Skeletal Spectre recordings (especially Tomb Coven), I can't say there are many surprises lying in wait through the follow-up, but it'd be impossible for me to envision a world in which I couldn't bang my head and chuck the horns to this.

What separates this Swedish/US collaboration from more directly mirroring its more dreary forefathers is the fact that, in part, it's another nod to the Sunlight studio guitar tone and D-beat driven, rock-fired riff grooves characteristic of groups like Entombed and Dismember at their prime. Tracks like "Shallow Grave" and "Bone Dust" definitely scratch the itch for Clandestine or Indecent & Obscene, but then you've also got this rain-drizzled sheen of sombre melody circa Cemetery (Godless Beauty, Black Vanity) and Paradise Lost (Gothic, Icon) that rescue the compositions from becoming lost amongst the swelling crowd of cult sound- a-likes. What if Wolverine Blues had cultivated more of a Gothic/doom component than a bluesier rock undercurrent? Skeletal Spectre answers that question with loud, crunching, abrasive rhythm guitars that are admittedly quite lively even at their most basest sense of chugging, glazed or alternated with sadder single picked note sequences that confer some added texture to the meatier chords below. It does very often favor one technique to the other, like on "Black Augury Hollow", a pretty pure death & roll crowd pleasure bound to set jaws wrenching and limbs a-flailin', but that's because this is not a band interesting in boring anyone.

And they most certainly do not, with abusive, fuzzed bass lines and more or less the perfect mix of drums, which are as loud as almost anything else on the recording, without smothering the riffs or the more fragile melodies bouncing across the graveyard-scape. The kicks, crashes and snares would all do Solomon Grundy proud, and I admit many of the mid-paced riffs on this album evoked images of the undead villain wreaking havoc on his environs. Occasionally there will be a pretty neat guitar line, like the ascending pattern in the bridge of "Haunted Gallows" which gets a little buried against the remainder of the instruments, but it's audible enough to appreciate and just made me want to pay closer attention to the smaller details, which are legion throughout Voodoo Dawn. As for Nocera, she mixes up a gut-churning guttural with a mid ranged snarl/growl hybrid which is dowsed in enough effects that it consistently crashes around the atmosphere, at times feeling distanced from the more in-your-face bulk of the rhythm guitars, but just as gruesome as any of the other records I've heard her fronting.

The lyrics are pure cult/Gothic horror, which is perhaps no deviation from Tomb Coven or Occult Spawned Premonitions, yet still more novel than if they were to transform into yet another gore/slasher fan-service death metal band. Qualitatively, I'd actually place the record between the first two. Tomb Coven was a wretched, rotting and fresh experience back in 2009, but Voodoo Dawn rocked considerably more than the sophomore. Not the sort of album you'd seek out if interested in an original approach to the nostalgia of the death and doom mediums, but focused more on putting a smile on the faces of classic horror and death metal buffs, which it does. Recommended as a sort of 'uppity, poor man's Hooded Menace', or to anyone who enjoys the output from Nocera's extended Razorback/underground family (Wooden Stake, Decrepitaph, Fester, Loathsome, Howling, and so forth)...or even the rougher, muddier side of the retro-Swedish death metal movement out of Europe over the past decade (Tormented, Mr. Death, Revel in Flesh etc.)