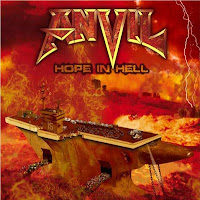 Hope in Hell is an interminably frustrating album because while its fully smooth and consistent with Anvil's canon, it just seems so bland, also- ran and forgettable by comparison to even their last few records. There wasn't a single hook or chorus among the 13 present here that I felt any attraction towards, though it's a direct stylistic successor to their last triumph (Juggernaut of Justice) and even bears a lot of similarities to their classic 80s fare like Forged in Fire or Metal on Metal. The tunes seem more or less dialed in from prior ideas the Canadians had already executed better, and the lyrics border on stupider-than-usual (from a group that has always had a penchant for a few silly themes on each of their many full-lengths). Not to mention, that even while I can't say I've ever seen an album cover of an anvil transmogrified into an aircraft carrier in the flames of the abyss, the artwork and title seem a little cheesy...not a first, really, nor is this the first disappointment I've encountered from this very band.

Don't get me wrong: it's pure Anvil. They haven't suddenly become Bon Jovi. The titular opener is the sort of slowish, heavy/doom crawl you'd expect from a band constantly attempting to reinvent "Metal on Metal", "Forged in Fire", or any other example of their Sabbath-like pacing. Instantly, you know where you are, back in the 'concrete jungle'. The musicianship is in no worse shape than on any of their prior efforts, with Rob Reiner's able drumming and Lips' pitch remaining consistent. But Kudlow is just not capable of pulling off a truly memorable line in either verse or chorus, and though they've always partaken of the 'everyman' lyrics rather than excursions into philosophical pretension or loaded prose, sometimes this just grows tired in its execution. Surely guys with 30+ years of experience have more wisdom to kick at me than "Badass Rock and Roll" or "Shut the Fuck Up", the latter of which is terrible. Sure, I'm nitpicking a bit, because the whole layman heavy metal thing has been their shtick for decades now, but combined with the very weak selection of rhythm guitar progressions on this album, it seems even more lazy and banal than usual.

Of course, if the chords and chugs were anything more than blazing effigees to tired, uninspired traditional heavy metal cliches that have been retread since (in some cases) the 70s, then I might still have retained a level of interest. This is Thirteen and Juggernaut of Justice were far from rocket science, but they both knew how to throw out some rhythm guitars or vocals that reaffirmed why I enjoyed them so much as a kid. Even the heavier, driving tracks here like "Eat Your Words" and "Shut the Fuck Up" are lamentably boring in their note choices, and though they definitely persist in that added layer of melody they implemented well the last time around, here the airy harmonies are every measure as predictable as the heavier undertow. "Time Shows No Mercy" and "Through With You" are examples of even blander songwriting, riffs that wouldn't even deserve to be on the cutting room floor of Metal on Metal or Pound for Pound, but somehow made it on here because 'like...they're pure old heavy metal, man.' In spirit, they're serviceable, but if I were to compile a list of post-80s Anvil highlights, not a one of these would make muster...

Anvil is a band you (or at least I) always want to love, and WILL continue to, because they're cool guys with hearts committed to music that most people abandoned for 15-20 years until its inevitable 'cycle' returned to fashion and then suddenly everyone decided to get back in touch with their youth. And yes, I'd say the same even if I had never watched The Documentary. But despite their best intentions, the Canadians are not above hitting a slump, like the substantial rut they found themselves in between Worth the Weight and Back to Basics, and I just hope this Hope isn't the 'teaser' for another one. Solid production, ageless musical ability, and familiar songwriting are the best accolades I can hoist upon this, but otherwise it's the least impressive outing they've had since hitting their nadir with Plenty of Power in 2001. As much as I admire Anvil, they are obviously far, far more capable than this, so I'm not about to sugarcoat my blasé reaction to this painfully average music. Time for an sonic enema of "Blood on the Ice", "Corporate Preacher" and "Fire in the Night" to purge myself of this lackluster offering.

Posted by autothrall at 5:25 AM