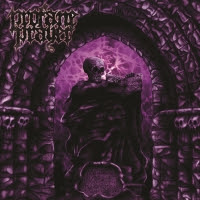 In seeking out such a purist, stripped perspective on its parent genre's aesthetic bounds, Profane Prayer's sophomore album Tales of Vagrancy and Blasphemy winds up just another stitch of withered flesh onto the vast skin-quilt of traditional European black metal. Anyone who might be expecting the rarer, Hellenic sense of melodic identity here will be soundly disappointed, since this is more or less tracing a lineage straight from the originators: Mayhem, Darkthrone, Bathory, and a few of their followers like Horna, Khold and Craft immediately came to mind through the very basic riffing patterns and the guitar tone, which is dry and raw but produced cleanly enough that your ears won't bleed.

There is little to no atmosphere beyond the core instrumentation: no keys, samples, no fogbanks of reverb to witch away the wretched vocals into the distance, and lead guitars are also anathema to their process of song construction. Some might laud this very 'roots' approach to writing, but unfortunately there were pitifully few riffing progressions of interest. Slower, rock-paced grooves (circa Darkthrone) are alternated with some standard blast beat/tremolo picked floods of despondency, while they occasionally implement some more dissonant, open picked guitars that bring you back to Norway in the 90s. The almost 'black metal blues' atmosphere of the opening cut "A Grave in Silence" had me thinking they might have more of a doom/black vibe, and I dug the bass guitar grooves and the dispirited, spacious riffing there, but this was soon eschewed for more familiar chord sequences and very little by way of interesting or memorable ideas.

On the production side, I thought the album was decent. The distorted bass tone manages to stand out even against the louder rhythm guitars, and the drumming is flexible and organic. As I mentioned, there's a primacy to the rhythm guitars due to the distortion, but they don't exactly configure into anything truly threatening or evil sounding due to the lack of eerie melodies outside of a few chord textures. Vocally this is pretty much the run-of-the-mill, wretched rasp we've come to expect from a million bands, but 'The Saint' handles this as well as most, with a few layered snarls applied to evoke added diabolism. As for the transitions and the actual structural dynamics of the songs, I have few complaints...I only wish they were built of more distinct riff progressions which I'd want to come back to. But beyond a few seconds of atmosphere, like the bell that tolls to inaugurate "A Grave in Silence" or the cleaner vocal that heralds "Silence", it's fairly barren terrain.

I remember reading about the group's debut Eye of Sin in 2011, around the same time I was covering the whole Greek black metal scene through chronological reviews, but I wasn't able to track that down and include it, so I can't speak to any changes here. In the end, I found Tales... too void of individuality and ideas to really distract me for long, even if it's by no means an offensive or terribly dull affair. They're not the only Greek group to play it so straight (Ravencult, Dodsferd and Naer Mataron all fit this description), but even compared to these they come up a little short. Didn't hate this, but didn't care either. Recommended only if you've just not gotten enough of this simplistic adherence to the black metal blueprint, but you could fare better in that market.