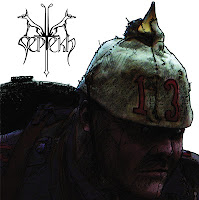 Apollonian Eyes is the third EP of Sweden's Septekh, though if what I'm reading is correct, the first two had the same track list. Thus far, the band seems limited to this particular format, not that I'm complaining, since if an artist isn't ready with enough material for a full-length, then there's no reason to squander space on garbage just to fill one. Also, the energetic hybrid of death and thrash Septekh creates lends itself well enough to a 15-20 minute listening, spurts of testosterone fueled mayhem that punches in and punches out for the after party. Aesthetically, there's not a broad gulf between this and The Seth Avalanche EP from last year. Similar stylized illustration cover art, and same general pursuit in the music, though I found a few of the moments more chaotic.

Best way to describe this is a mixture of, say Witchery or Maze of Torment with a more cruisin', crashin' death & roll undercurrent that is felt heavily through some of the burgeoning chord progressions and drums. They'll veer from dense, staccato palm muted thrash guitars ("Apollonian Eyes", "Burn it to the Ground") to a few patterns of rolling chords redolent of the whole D-beat movement in death metal. Leads are well enough put together, with a frenzied hard rock neo-blues style to them more than classical shred elements. Once in a while they'll shift over into something unexpected, like the blasting and tremolo picking in "Cursing the Skies" which cedes to an almost melodic death metal aesthetic, but even there they'll turn 90 degrees back into the thrash rhythms, so there's still a sense of consistency throughout. On the last EP, I felt as if the vocals were a bit too over the top in the mix, akin to Raise Hell's sophomore album Not Dead Yet (actually an overall solid comparison for the Septekh in general), but I think here on these tunes I was able to phase it out a little. Not that I loved the singing, but it was appropriately brash, bruising, and bloody.

The drums are effectively raw and abrasive, and the bass player has a tendency to go wild (like the noodling in closer "Vlad Tepes"). In terms of songwriting, all four pieces here give the impression that they're actually going somewhere, but Septekh only half-involves itself in creating variation for the listener.Some of the riff progressions feel all too familiar (like the intro to "Vlad Tepes" which is similar to many other melodic death cuts from bands like At the Gates in the mid 90s), and others are just kind of bland. But at the very least they strike an acceptable balance of business and flashiness that the music leaps straight out at you, like a great cat stalking you through the wild. Lyrically, this seems a little less raunchy and raucous than the last EP, with no mention of 'sluts' among the song title. Ultimately, though, I felt pretty much an identical reaction that I did last year. Vivacious, hellish energy, and this niche certainly has room for a few exciting bands, but the guitars and choruses weren't exactly sticky, and too soon forgotten. That said, if you're into any of the bands I listed earlier in the review, there's a chance you'll feel this.