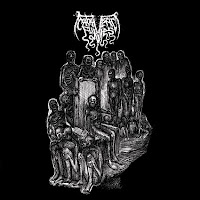 The glory of the vinyl repressing strikes once more, for without the MLP Blood Harvest release of Cadaveric Fumes' 2012 demo Macabre Exaltation, I might likely not have encountered the Frenchmen for a spell longer than it took. And yet, I've got a feeling that many people will be having such an encounter before long...because this is a ridiculously awesome, bowel churning concoction of classic death metal which borrows only marginally from the Swedish scene of the early 90s, with a liberal seasoning of Autopsy, and as a pièce de résistance, splashes in a sense of unusual, warm harmony to a sampling of the guitar progressions, plus some killer ritual dark ambiance to round out the undead throttling of the necrotic fleshed riffing patterns.

In short, I enjoyed the pants off this damn thing. The tone of the guitars is fucking unreal, a bulky and filthy overdrive that manages to sustain its punch in both the more meticulous muted picking (intro to "Vault of the Haunted Mist") and the morbid melodies that the Fumes are deliriously unafraid to implement. A lot of the guitar structures draw upon records like Mental Funeral, Onward to Golgotha or Scream Bloody Gore for inspiration, and you can just hear the crud and worms dripping off these damn axe lines, but they're also capable of embedding some faint spikes of dissonance that create a barely tangible nod to black metal. The
drums, in particular the kicks, are not as bold or brazen as in other death metal dinosaurs, but with guitars this ghoulish, they're still audible enough to evoke that an ubiquitous, earthquake foundation over which the skin tearing riffs can stretch themselves. Distant organs and other effects are often thrown in there to build subtle hints of horror (like in the bridge of "Gravecrusher"), but overall, even though a few of the guitars do radiate a warmer, emotional aura, you just come away from Macabre Exaltation feeling unclean (in the best of ways).

Dank, necromancer gutturals aren't exactly pronounced above the guitars, but they really create this sense of suffocated accompaniment to the more intricate picking, like a ghast that gets trapped after some sinkhole opens in the local graveyard. I suppose Macabre Exaltation does scratch a similar itch to a lot of the more 'cavernous' retro-death metal released in the past 5-years, and I think its lineage of influence is quite clear, but Cadaveric Fumes is ultimately an exercise in how to properly compose such material without becoming dull, predictable or repetitive. You won't always guess what is coming next. The track lengths and riffing styles offer sufficient dynamics throughout the four metal cuts, and it feels like some unburied treasure. This is just that awesome. So if you haven't heard it yet (and considering the limited press of its tape incarnation, that is likely the case), make a correction, especially if you're into Krypts, Vasaeleth, Innumerable Forms, Portal, Abyssal, etc.