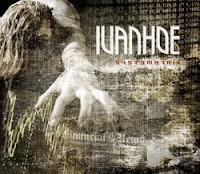 Why doesn't anyone I know in real life listen to progressive metal? Yeah, sure, Dream Theater, Rush, Queensrÿche, Opeth, and maybe a few might remember Fates Warning, but beyond that my offline existence is void of any discussion related to the niche whatsoever. Is it really such a dweeby hobby that its fans are self-relegated to internet whisperings and the brief annual turnout at a gig or two? Or is it just that I live in a hotbed of hardcore, metalcore, grindcore, death metal and whatever other metal bands can pick up some of that audience through scene osmosis...and not some land of plenty where Operation: Mindcrime, Images and Words and Perfect Symmetry are held up as some monumental trinity? Either way, groups like Ivanhoe continue to exist, record, tour, and expand upon the legacy of artists like those I mentioned earlier, even if they're rarely embodying the pioneering spirit of their sub-genre so much as milking it dry...

...and that is the long and short of what makes Systematrix, the Germans' sixth full-length outing in a 25 year career, both enjoyable in the moment, and sadly forgettable later. At its heights, Mischa Mang's silky but cutting vocals, and the glazes of beautiful ringing guitar harmonies congeal into a blissful barrage of moments redolent of Lifeline's highlights; yet it feels altogether too long (at just under an hour of material if you include the bonus tracks) and often settles itself into some stolid but unmemorable syncopated grooves circa the Moving Pictures and Counterparts camps, without escalating into an appropriately climactic chorus. Granted, it's well arranged with a nice layer of synthesizers that are used both as classically-tinged orchestration and 70s/80s inspired prog lines, so that the content never becomes too baseline or uninspired, and there are a few cases of risk taking like the tonal soft-rock/dark ambient/electroscape that supports Mang for the first few minutes of "Madhouse", or instrumentally in "The Symbiotic Predator: I - Seduction", but by and large, Systematrix is playing it safe, and any evolutionary gradation that might have existed over their prior works does seem to have come to a halt.

So Ivanhoe relies heavily on its musicianship, production and hooks, two of which are resplendent here in the tightly controlled jam-bridges where they almost never cross the precipice of righteous self-indulgence that a lot of Dream Theater disciples partake of, and the nice midsection punch and groove of the rhythms guitars that counterbalance Mang's distinct, sensual presence and the synthesizers. The bass is good and loud and they are unafraid to put a bit of grime on there where the guitars are harder hitting, not to mention that this guy (Giovanni Soulas) can keep up with anyone else in the band in terms of his technical ability and he is not afraid to let you hear that. Rhythm guitars are constructed from a lot of simpler patterns than you might expect in this field, but that's not to say they don't possess some variation, it's just that they too ably enable the melodies to instantly shine over them and create a lullaby effect with the pianos/keys (like the bridge to "Resolution"), where I'd love them to just ramp up the 'metalness' of the actual chords and palm mutes, perhaps intersperse some more blazing, acrobatic progressions.

At any rate, there are still some solid cuts among these that were written at the level of Lifelines or Walk in Mindfields, like the twisting and harmonious hybrids "Walldancer", "Tin Cans Liberty" and "Learning Path" which are all engaging enough that I kept spinning through them regardless of whether the chorus lines were as sticky-sweet as others they've unleashed in the past. It's difficult to imagine a broad audience for this partially because of my own regional vacuum where people would ask me (not kindly) to shut this off and put on a Tool record instead (ignorami!), but Systematrix is sure not to disappoint any fans of their other Mang-era releases or modern prog metal which establishes a balance between driving grooves and more ear friendly pianos and melodies. A more laid back counterpoint to a Pagans Mind or Angra. Too smooth where it occasionally needs an edge. A decent disc, but I'd so love to hear what this stable of musicians could produce if they would just rattle the cage, loosen the reigns, or bare their fangs a little more often.