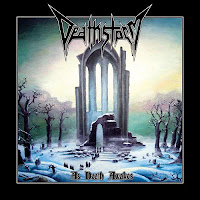 Derivation is an uncomfortable bedfellow, but when it comes to metal music, it is also the cliched sincerest form of flattery. While I think a lot of headbangers today are far too apathetic on their quest to sniff out nostalgia for a time they either experienced (or didn't, the circumstance of being 'born too late'), often to the point that they forget that what drew them to their favorite bands in the first place was that innovation and originality they seem to scoff at, I don't have much of a problem with a band which comes along and offers a further supply of something there was precious little of in the first place. In the case of Austria's violent thrashers Deathstorm, there is little to no doubt which well they are heavily sipping from: malicious Teutonic thrash of the mid 80s, with a few hints of Bay Area's most bloody artisans from around that same period.

Kreator was what I was thinking first, largely due to the uncouth flesh ripping vocals that are highly redolent of Mille Petrozza from the Endless Pain/Pleasure to Kill era. These are truly vicious and brash, with not even the faintest hint of concern for catchiness in either verse or chorus. The lightning riff sequences also have a similar structure of hyper-accelerated punk interspersed with pints of bright but unfriendly melody that evoke a surgical semblance to Terrible Certainty, Persecution Mania and Release from Agony, though these Austrians are a lot more rough around the edges. Obviously Slayer is a factor, as is Dark Angel, but I think the former was even true of the most successful German acts in the style. Deathstorm's riff choices could be defined as 'familiar but too bustling with rage and youth to give a god damn'. Rarely as well written as their influences, but nonetheless fun enough if you're just looking to blow off some testosterone, which I'm guessing is really the point of As Death Awakes. Thankfully, the band doesn't accomplish this through mere monotony, but they actually have some varied song structures like the cleaner tinge of the guitars that open "Nebelhexe" (with the raucous phased bass-lines that commit a total freakout!)

Production is a bit on the dry side, but that's likely because Deathstorm haven't any interest in giving their music a modern, glossy treatment, since it then might lack the authenticity of the popular old school. The rhythm guitars are a bit more brazen than, say, Terrible Certainty, and they tend to overpower the crisper, tinny snares and crash drums, with a bass kick that is almost inaudible except during slower sequences. The bass guitars are fine; this is a three-piece power-trio with a live-oriented sound, and what he's playing, while not always interesting, is strong enough to support the rhythm progressions while he's barking out his blood curdling rasps. There aren't a lot of money shot riffs here when taken individually, but the Sodom-like mid paced breakdowns make you wanna mosh like it was 1987, and the faster material is filthy and manic enough that it keeps the ears affixed through a sizable chunk of the content. Some of the lyrics feel as if they've just been lifted and rearranged from old Slayer, Destruction, Kreator, and so forth, but then a lot of these re-thrash groups don't exhibit much creativity in that department.

Overall, As Death Awakes is a bloody nose, a broken bone, a case of road rash that I found efficiently abusive enough to appreciate, and certainly something that chasers of sound-a-likes for Pleasure to Kill, Darkness Descends and other comparable records would find appropriate amidst their questing. But just don't go into it seeking something capable of a truly lasting impression/concussion, because a lot of growth is still necessary for Deathstorm to really make their mark on this already flooded scene of rehashes and loyalists. Also, really loved the cover art to this one, even though aesthetically it doesn't seem consistent with the music. But, hey, it beats another gas-masked pizza thrash mascot, pitchfork-wielding devil, grim reaper or wolf riding a motorcycle.