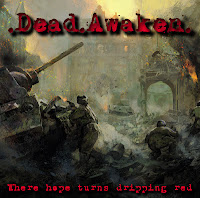 I'll say it up front, fellas: you deserve a better logo than this, so cough up the $50 or $100 and have someone design it. A typewriter font with the shadowed text seems a little cheesy and below the music on this very disc. Dead Awaken is a Swedish band, that, from first impression, play some war/death metal in the vein of Bolt Thrower, Jungle Rot, Sodom or Invasion (US). Refreshingly, this has an 'old school' vibe to it, but the Swedes are not exactly your garden variety millionth Entombed clone or the latest suffocating cavern-core sensation. No, these guys have been honing their craft since the earlier 'Oughts, with a sizable succession of demos that have led to this Abyss Records debut; upon which they strip down the genre to its roots without sounding like a pale imitation of one of their forebears.

Granted, these guys aren't exactly nuclear scientists in the field, and innovation is not a factor in their writing, but there's something inarguably refreshing about how they hand you your ass. Loads of double bass drumming in step to the palm muted riffing sequences, and a great, audible bass guitar tone that bumps straight through the rhythm guitar. Like an artillery unit, their rhythm sections just levels the theater of operation, shelling from a safe distance and then sweeping up with tanks and foot soldiers only after the smoke clears. Tracks are kept concise and concussive ("Mudhell"), with a lot of ballast and groove to them that often reminded me of a cross-breed of Bolt Thrower and Pestilence, a beating I am only happy to receive. Occasionally, the riff patterns in the belly of tunes like "Carnivore" will adapt a more surgical, thrashing visage which reminds me of early 90s Sodom (i.e. Tapping the Vein) due to the strong presence of the bass. But they'll also set up some more dramatic instances with sliding melodies ("Deutsches Afrika Corpse") or slower, strutting mute patterns ("Rocket Symphony") that express a dynamic range across the album as a whole.

Vocals are very brute and sincere, with a hint of Karl Willetts if not nearly so bleak and grim. Not incredibly expressive or memorable, but when spent over the tightness of the instruments, they deliver constant punches to the gut. I also like that Dead Awaken retain consistency across a good range of tempos...when laying on the acceleration for "Envy the Dead", for instance, the musicianship never falls off. Leads are a little messy and they'll flash through one ear and out the other, and naturally since the band don't load on a lot of samples or effects, nor do they engage in the slower, glorious Bolt Thrower melodic textures, the only plausible 'atmosphere' to the record is strictly in its violence. Where Hope Turns Dripping Red isn't exactly riddled with amazing guitar progressions that you'll want to keep pressing 'repeat' on, but absorbing oneself in the sum 34 minutes of the experience is nonetheless fun, and I enjoy that they don't wax nostalgic to a fault; there are flurries of hostility here that might also engage the brutal death crowd, even if Dead Awaken don't tango with that same high level of technicality. In the end, this is just good death metal. Period.