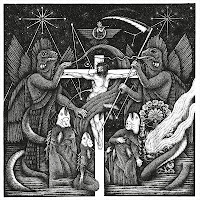 At the risk of alienating my saner readers, the best means I can find to describe Ogdru Jahad's debut album is to imagine if your local public sewer system, due to some toxic evolutionary tampering, gained its own sentience and then wrote a metal record influenced by whatever barbaric shit it could find lying around, like long abandoned copies of Bestial Warlust, Blasphemy, Havohej and Teitanblood albums. That the members of this Danish act hail from the ranks of other acts like Sadomator is no surprise, since this is a match in ugliness for just about anything else you have ever heard from that particular country, rivaling even Undergang, and therein lies its charm: for whatever I lacks in riffing strength, it makes up for utter disregard for warmth and melody. Flagrantly disgusting blackened wardirt deathfilth that rivals another Iron Bonehead act (ZOM) in its primal, antagonistic girth.

This is not some lost suite from Wolfgang Amadeus Mozart. It's a putrid excretion of murky, churning rhythm guitars whose riffing tropes are drawn from a plethora of archaic extreme metal and hardcore sources, driven by an often monotonous, moderately paced blasted drum kit, and then smothered in guttural vocal corruption which is little more than a primitive war-bark which varies only in how long the singer decides to sustain his wretched, gravelly intonation. Spurts of tremolo picking and an occasional, lurching sequence (like those in "Hobo of Nazareth" or the closer "It Is Done...") are about the intercessions the listener will receive from the constant battering, and this is not an album one should seek out for exquisite musicality or even a small dynamic range. The merest of variations is provided, but in general they're not beyond a one trick pony. Experienced in strings of two or three songs, I didn't sense much tedium setting in, but listening straight through the entirety of the play length does strain on the nerves. Then again, I'd argue that the audience for this strain of aggression is rarely interested in balanced musicality or rampant tempo shifting, and to be fair, there are brief moments of pure atmosphere (like the intro or the male chant opening "Hobo...") which seek to break up the all too-streamlined songwriting.

As hinted above, I didn't love a lot of the individual riffs. They're efficient and bruising enough, and changed up through even the shorter of tracks, but feel like a pastiche of familiar progressions culled from the black, death and grind precursors of the 80s ranging from Hellhammer to Repulsion, configured with aesthetic choices redolent of Canadian war/death of the 90s. The note positioning is rarely evil or menacing sounding of its own accord, that only comes into the picture through the sum nihilism of the rhythm section and vocals. I think some wailing, nasty melodies or more dissonant chords would have added texture and dimension, since the album is too earnestly dry and dirty. Also, the bass lines exude a turbulent presence but often just support the rhythm guitar to the music's detriment. Despite these setbacks, though, I was able to enjoy the record on a purely visceral level, where the revulsion is also the attraction, and there's something quite honest about its bare-flayed, hostile intentions which is sure to appeal to a lot of bands on the Nuclear War Now!, Hell's Headbangers and of course Iron Bonehead imprint.