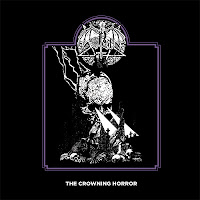 Though the Swedish Pest has always clung to the roots aesthetics of the black metal genre, rarely sounding as if they had stepped out of the early 90s to take a look around at what's happening lately, their latest opus The Crowning Horror goes one further, conjuring an evil and primal innocence through their songwriting that just as well might have arrived 20-25 years ago. If you muddied up the production a bit more, this record might have appeared in 1987 and been worshiped these years as an obscure, unearthed 'first wave' gem. When done properly, like on a few of Vultyr's records or that excellent Head of the Demon debut last year (also from Sweden), I am an absolute sucker for this style, and through its simplicity comes its novelty. A 'past' that never was, manifest into the present climate. The Crowning Horror isn't as doom-driven or atmospheric as the Head of the Demon album, or as abusive as past Pest efforts like Rest in Morbid Darkness or In Total Contempt, it shows a lot of class...

Part of this is achieved through the primarily traditional/purist heavy-metal composition of the riffs, with chord patterns redolent of the dirtier British and German heavy metal of the early 90s more so than the rampant tremolo picked riffing, Celtic Frost/Darkthrone grooves and dissonance we associate with the 'second wave' style. Throw a higher pitched vocalist on The Crowning Horror, especially on a mid-paced piece like "Devil's Mark" or the Sabbath-ian step of "The Abomination of the God", and you'd not even blink twice as dubbing this an entirely different genre. But once the harsh barks (similar to Nocturno Culto or Aura Noir) are delivered, it helps maintain that this is really a hybrid effort, with its feet in one style and its head up another. Add to that the simpler drumming, the perfectly honed level of distortion on the guitars (not too much drive or hiss, but plenty of power), and the fluid punch of the bass lines and you've got yourself a generation-defying album sure to appeal to all the fans of nostalgic happenings, vest metal, etc. Unlike Darkthrone's latest, The Underground Resistance, however, Pest is playing it completely straight, without any of the cheesy attempts at parody vocals and ironic lyricism.

Granted, there are a few points here where Pest slip back into their prior skins, like "Holocaust" or "Demon" where they dial up the pace for some primitive but still atmospheric, familiar black metal riffing and modest blast-like beats, but I think this only further strengthens the record since it evokes a greater variety and reveals that the Swedes aren't just buying solely into the 'retro' thing or shifting perspectives entirely from their prior works (they've always happily waved the old school flag). The leads and melodies exhibit a lot of flashy but controlled techniques and help to round out the rust-flecked rhythms, and they come up with some genuinely killer riff progressions like those in "The Crowning Horror" itself which honor the traditions of speed, thrash, heavy, doom and archaic black metal simultaneously. It's not incredibly original in terms of the music or subject matter, and not all the tunes stick with the same adhesive properties, but all in all I had a blast listening through this, and tracks like "Volcanic Eyes" and "Devil's Mark" will easily find an audience within the cult heavy/extreme metal niches, whether you enjoy Darkthrone, Mortuary Drape, Aura Noir, Venom, Bulldozer, Sarke or even more obscure, evil 80s emissions like Exorcist's Nightmare Theatre or None Shall Defy from Canada's Infernal Majesty.

Crack open a beer, chain up a 'virgin' for some after hours 'role play', smoke up some incense from a fake (or real) skull, and put some Italian cult horror on in the background for good measure. Then hit 'play' and try NOT to smile. And if you don't, well, then you've probably got other problems to attend to.