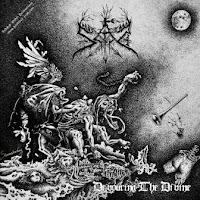 About the worst criticism I can evoke for Devouring the Divine is that it proves another Sad recording that dwells around the median of the black metal genre: standard songwriting techniques with tight execution, but nothing particularly poignant or memorable apart from a few of the harmonic textures of the dual guitar lines. That said, these Greeks have always had a decent standard in terms of production, and their latest is no exception, with a professional mix allowing all the instruments to shine through, while desperately surging below the suicidal snarls and rasps of Nadir's very up-front delivery. In fact, the clarity of the delivery bolsters the strength of the riffs, which are almost exclusively centered on tremolo picking wastelands of sorrowful note progressions that ebb and flow with the meatier transitions into chords.

There's a bit of the 'Transilvanian Hunger Effect' here, in which a lot of songs follow the same general tempo and then seem to bleed into one another, but like that album, I can't say that I found the material boring or redundant in the slightest...simply consistent. A lot of tracks are 6-8 minutes in length, but shorter on average than Abandoned and Forgotten, and each packed with at least a half dozen decent rhythm guitar patterns that allow them some degree of variation. As usual, Sad is more cognizant of Swedish and Norse influences than their Greek neighbors, so the melodies are often built from the mold of bands like Bathory and Dissection, with the strongest resemblance possibly to Arckanum, if not as catchy in their simplicity. The beats are all basic blasts or uptempo trots, without much personality since the focus is so heavily on the guitars and vocals, but there are enough fills to feel like they're not on autopilot. The bass lines offer an added layer of melodic undercurrent to the streaming riffs, but otherwise aren't wholly interesting, which I can somewhat forgive seeing that there's just one guy handling all instruments.

Admittedly, once you've made it past the first few tunes, "Cursed Be the Light" and "Grim Reflection", there aren't a whole lot of surprises, and by the time you hit the finale, "I Bleed a Lake", you feel like you're just treading the same ground as 37-38 minutes leading up to it. But that's Sad. Not a band you're listening to for innovation or a high level of dynamics; albums will differ mildly from one another, but they've always stuck to the same general path and they show no signs of deviation. You know what you're getting before you even you begin listening, and in the case of Devouring the Divine, it's certainly a passable effort. I still think that Ungod is better used in the blackened thrash cult Slaughtered Priest than any of his other projects (Kvele, Necrohell, Insidius Infernus, and this one), but ultimately this is the strongest Sad full-length since A Curse in Disguise, and if you enjoyed any or all of their offerings, then I doubt your feelings will change here. Solid.