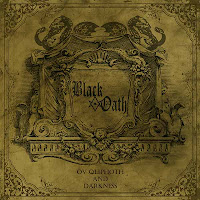 Italy's always had somewhat of an 'in' on the traditions of doom metal, a natural ability to produce bands of a classic, creepy or epic nature, from Paul Chain to DoomSword. Whether its the unshakeable influence of the drama, terror, glory and tragedy of the Roman Empire or the unnerving cult horror films of the masters like Argento and Fulci, the old land is clearly ripe with sadness, fell majesty and morbidity, and two of the three aesthetics make their way onto the Milanese Black Oath's sophomore Ov Qlipoth and Darkness with style. This is an incredibly balanced, if ultimately not that unique, experience which seeks to hold the listener in its clutches from the first note to the last, only occasionally letting go where it lapses into a brief, creative coma where the elucidated grandeur and encumbrance cedes to a bland guitar progression. Thankfully, though, these are rare happenings which fail to mar the surface of what is otherwise a solid trip, and even if the music isn't quite as eerie as the lyrics and themes probably hint at, I definitely felt like a solemn observer in an autumn garden of statues.

That all of Black Oath's components are fully capable of standing alone and delivering, but still functioning in tandem, plays a huge role in this record's success. Whether the voluminous, clean bass-lines roll out independently of the crushing chords, or the cleaner guitars wring out a folksy despair, there is no dearth of atmosphere to be found anywhere in the 51 minutes of material. That said, the rhythm guitars, while flush with the traditions of Sabbath, Candlemass, St. Vitus and Pentagram, are well composed and creative enough to drive tracks like "Sinful Waters" and "Witch Night Curse", both of which number among my favorites. I'm not the hugest fan of the simplest chord structures (i.e. early on in "Scent of a Burning Witch"), but even there the murky pondering of the bass guitar and the vocal melody spare the songs from becoming too dull. Rhythm guitar is cast in a clean mold with high volume and just enough crunch, but also works in bliss with the more melodic harmonies that they'll often flit out to ramp up the sadness of the situation. If I had to brand this in any subcategory, it would be heavily in the 'Gothic Doom' camp, because its more like ancient, ivy choked architecture than the psychedelic swaths of 60s and 70s worship so popular in the medium today.

Drums have a crisp, steady pulse to them which sounds just as rich as the rhythm guitar, but they rarely hit more than the expected rock beats that generally accommodate the slower or mid-paced acts in this field. Vocalist A.th has a pretty distinct intonation, though. Melodic, with flashes of Liebling, Osbourne, 'Wino' or even Messiah Marcolin, though not nearly so potent or operatic. The accent can become a bit wavering or unusual, and the singer tends to remain in his safety zone (sort of like the vocalist for Ghost), but I dug the harmonic layering, and when he injects a whispering rasp like in "Drakon, its Shadow Upon Us", or the title track, you get this ritualistic contrast which feels as if a circle of hooded individuals wielding curved daggers has materialized into a noose around you. Even where the vocals dip into a slightly mellower, lower note procession ("...My Death") they hold their character, but I wouldn't have minded some wilder screaming to go with the more controlled flow. And that's actually one quip I had at large with the material: it seems all too steady and stolid, and you occasionally want to hear Black Oath freak out and intensity with some loosely structured breaks.

Especially as it seems like the guitars are very often interested in breaking free of the traditional few-chord doom parameters. I wouldn't call anything 'technical', but 'detailed' is apt, when you experience a lot of the little frills and fills he asserts within the context of the busier riffs. Black Oath seems to understand that much of the best doom does not equate to the most monotonous, repetitive and tortured, but that it's capable of layers and intricacies which are often lost on power, speed or thrash metal. Because of this detail, the disc demands to be experienced repeatedly, so you can pick out those little quirks while bathing in the eloquent sadness of the domineering vocals. Ov Qlipoth and Darkness is perhaps not an exceptional example of its niche, but a rounded and competent work which leaves few stones unturned as it slowly and surely lobs them in your direction. Not as emotionally wrenching or brilliant as Nightfall, Icon, or Sabbath Bloody Sabbath, but if your tastes include groups like Count Raven, Pagan Altar, Reverend Bizarre, and Lord Vicar, I think these Italians are well worth a shot. After all, 'It is easier to find men who will volunteer to die, than to find those who are willing to endure pain with patience'.