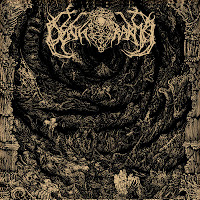 Death Karma is a new Czech extreme metal project likely to draw a large amount of attention due to the presence of drummer Tomáš Corn, who performed on Lykathea Aflame's full-length Elvenefris, which has developed a massive cult following online in the decade plus since its creation. He is partnered here with multi-instrumentalist Infernal Vlad, who along with Corn has performed in the live Maniac Butcher lineup, and the duo sets out to create something equally punishing and riveting but not necessarily an imitation of their prior works. A mesh of death and black metal aesthetics which explores haunted atmospheres delivered at a generally high pace, a technique which I admit is rather rare, since most practitioners prefer a snail's crawl or mid-speed rock delivery. I've heard a few other acts that attempt to integrate blasting excess into the Cyclopean, cavernous themed extremity we so often hear in recent times, but few are quite so oppressive as this pair.

Enormous, blocky, over-the-top rhythm guitars pummel along with dense patterns of tremolo picked notes and mystique, Eastern flavored chord progressions, while the drums thunder under as if they were triggered fault lines about to unleash cataclysms upon the surface world. Meanwhile, the vocals take on a more ghastly guttural intonation that occasionally is interspersed with an ominous, cleaner male choir effect that takes A Life Not Worth Living into the realm of unnerving ritual. Further texture is applied with faint backing organs that hover over the breadth of the riffs, and the result is as if you were trapped in some cathedral that had sunk below the Earth, in which twisted, deviant clergy conducted arcane rituals with no regards to morality. The drumming is potent and raw rather than seeking a brickwalled exhibition of technicality, but Corn is still just as capable of letting loose as he was on Elvenefris or Maniac Butcher's Masakr. He merely chooses not to overthink the structure of the riffing, and let the warlike fills and suffocating blasts beat in the listener's head like giant, ugly wooden hammers, which is rather effective when Vlad is pursuing a more punkish chord sequence as in "G.G. Funeral". And even more potent alongside an engrossing, simplistic tremolo repetition like that in the heart of "A Dead Oracle".

Ultimately, while not devoid of a more glorious surge of melody here or there ("DeathKaos"), the EP is best suited to when you just want a fast channel to the abyss. Like the cover artwork, you can envision yourself plummeting directly into some rocky, corpse-strewn cervix of damnation, and any attempt to spread your wings ends with their quick, atmospheric incineration. Death Karma does not skimp on the variation, and there are a lot of slower breaks that help round out the overall momentum of the 18 minutes, as well as a nice balance of death-based muted low-end riffing to help balance out the more brazen black metal explosions; but trust me, the burden here is quite claustrophobic and consistent across all four cuts. Definitely something that will impress those who enjoy calamitous, but layered productions, or something more forceful and vivid in its destruction than a lot of other throwback death/black metal hybrids. Imagine a mix of Marduk or Enthroned's more modern (21st century), unhinged atmospheric output with bands like Muknal or Incantation who use a lot of faster riffing in sync with their subterranean inclinations, and you may arrive at A Life Not Worth Living. Should prove interesting to see how the duo might fill out a full-length of material, but this is a suitable start which will no doubt win some buzz.