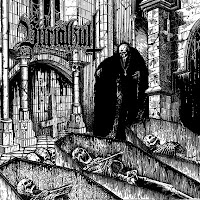 The best description I could give for A Call from Beyond the Grave is that listening through it was like flossing my teeth with a pitchfork and then gargling molten hellfire. So earnestly does it evoke the forerunners of black metal's 'first wave' that you feel transported back to around the late 80s when Bathory, Celtic Frost and Venom had unwittingly built a trinity of sounds that would shake the world of extreme music, and then bands like Mayhem had just arrived to sweep up the dust with outings like Deathcrush. Naturally, being composed and released in 2013, the Burialkult debut has the convenience of a more barbaric countenance than its influences, and certainly there are infusions of bestial, belligerent war machines like fellow Canadians Blasphemy, or Finland's Beherit. This is not the sort of recording to seek any expansion of the niche aesthetics which fed directly into its own creation, and both lyrically and structurally its well aware of its lack of new ideas, but committed to slashing an inverted cross into your psyche regardless, and one can appreciate its primal aggression.

Immediate attention is called to the production, which is infernally raw and savage to the point that you could have told me this was a live performance and I might have believed it. Not that you can hear the ambiance of an audience, mind you, but the instruments are delivered with absolutely no bullshit, and polished only to the degree that it remains audible. The cymbals clash like broken dishes and glasses, while the rhythm guitars have a substance comparable to a rusted sewer grill, ripping and zipping along like the revving of daemonic motorcycles. The vocals teeter between the traditional black rasp and a more nihilistic growl one generally equates with black/death or war/black hybrids, and they're slathered with sustained snarls and a sociopathic, utter darkness that has no consideration for melody or memorability. Granted, they're not amazingly unique or effective, but it would be difficult to imagine another style being implemented efficiently alongside the feral aesthetics of the guitars and the splashing and crashing of the drums. As for the bass-lines, they're buzzing along in there somewhere, far more obvious when the guitar is tearing out a tremolo picked progression, but suited more to cohesion and atmosphere than creating fills or low-end harmonies.

Loved the few ambient mood pieces here, like the numbing organ/ambient noise of "Hossana in the Depths" or the enormous thudding drum swells of "Provocations". Burialkult is also not above the incorporation of some distant, droning guitar melodies ("Filth") to add some texture to an admittedly primitive selection of guitar riffs. They also mix it up quite well, between faster, caustic, blasted fare ("Throne of Disease") and a lot of slower, grooving, damning tracks. You'll hear quite a lot of mid-paced, ancient thrash biting into a few of the note progressions, and like a lot of such raw and rotten black metal, there's a clear punk undercurrent to the evil chord configurations. Neither being a novel technique for a band so raucous and raw, but both help to really flesh out the band's possibilities for material, and thus there is some variation in the riffing over the ten metallic tracks. Lots of patterns ring true and familiar to records like Under the Sign of the Black Mark, Death Crush, A Blaze in the Northern Sky and so forth, but that's not unusual for a band along this particular path.

A Call from Beyond the Grave is a bit mid-heavy like something you might hear on an old tape recording. There's not a lot of equalization, and the bass-levels are more of a muffle than a swell. As such, it can get mildly irritating and potentially cause a headache, but I've certainly heard a lot worse. Burialkult is at least listenable. I think my biggest complaint would be that, while this record lovingly and effectively portrays its influences and reminds me why I so enjoyed them, it just isn't capable of the necessary riffing and chorus structuring that makes itself one of those 'mandatory' sorts of throwbacks. With track names like "Eternal Satan", "By Satan Possessed" and "Necrotormentor", sure you know exactly what you're getting into, but I definitely feel like this style doesn't need to always lead to a dead end musically. Some more interesting tremolo patterns, dissonant and unusual chord choices and even more wretched, tortured vocals might have transformed this from a decent experience to an essential one. They're great at atmosphere, but I feel like infusing it more into the metal songs and not just intros and interludes might also have helped this stand out. As it stands, though, Burialkult still has an appreciable debut on their hands, well fitted to fans who take their black metal filthy, rotten, horned and uncircumcised.