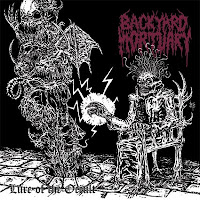 Lure of the Occult was like having some temporal burglar sneak into my basement in 1991, steal all of the tapes in my rapidly expanding death metal collection, then return to his/her hideout in the present, study all of the loot, and record an album which perfectly combines all of the material's strengths. I bet y'all wish you had come up with that particular machination! Granted, what this means is that the Australians' debut is not exactly filled to the gills with innovative songwriting, but I think that's pretty forgivable when the results are this entertaining. I like that I could never pin Backyard Mortuary on aping any one particular band; no, this is Death, Autopsy, Incantation, Morbid Angel, Entombed, Gorguts, Immolation and Obituary rolled into one, mighty, zombified joint and then blown into your face through the mummified breath of ages. In other words: awesome, and while, like myself, you might have missed out on this last year, there's a snazzy new vinyl re-issue coming from Blood Harvest records (out of Sweden) that should give it a well deserved 'second wind'.

Have to admit, from the cover artwork I was expecting some raw, primitive recording of black/death or black/thrash/war metal, so imagine my surprise when it was actually tightly executed old school death metal with a reasonable level of polish to the guitars. Probably the most uncouth and out of control element would be the vocals, which temper an ominous, deep guttural punctuation with loads of reverb and atmosphere, plus a more impish rasping edge that applies some variation and character. The guitars, though, have a very focused, low-end crunch to them that immediately recounts the more slamming sensation you felt from the earliest of 'brutal' death metal ("Beyond the Grave"), but then they'll intersperse all these diabolical Slayer school melodies, or some haunting and possessed tremolo rhythms that frighten me almost as much as the first time I heard the bridge to "Chapel of Ghouls". Despite the fact that much of the riffing integration would feel simplistic to today's death maven who has been exposed to far more technical material, nothing here is so debased or primitive that it feels thoughtlessly calculated. There's a lot of texture and pacing over the course of Backyard Mortuary's debut. Time was spent writing this: and thus, my time is not wasted in listening to it!

Lure of the Occult has everything. Slower, churning grooves in which you can really feel the breadth of the chords as you once could for a band like Obituary on Cause of Death. In a few places, it might even pass for a death/doom hybrid. But then there are the more clinical, taut, accelerated passages which seem like an unholy merger of Morbid Angel, Cannibal Corpse and Immolation near the dawn of the 90s, with these harrowing and dissonant fields of possibility that feel like a hundred tombs being cracked open at once. The bass guitar has a good, clean tone which ramps up the meat of the rhythm guitars, while the drums can easily spout out an interesting blast or fill or some great, cadence-like structuring to the palm muted grooves (like in "Mutation"). No two tunes sound quite the same, but the vocals really gel them all together, so ghastly and huge and grotesque whether they're mounting the slower, Cyclopean surges of "Deprivation" or the thrashing repulsion of "Macabre Butchery", which is hands down a great tune and one the best singular retro death pieces I've heard lately.

No, it's not all so insanely catchy, nor does it surpass the many albums it owes its own existence to, but it's a great example of how nostalgia doesn't necessarily need to take on the form of some horribly underproduced or cavernous atmosphere (though the vocals fit that bill) to feel appreciably archaic. Death metal bands of that era were generally striving towards better mixes and sounds themselves, and Backyard Mortuary does honor to the realities of the period rather than a skewed perception many younger fans might have. I loved that nothing on this record felt underdeveloped. The leads are well placed and exciting, the rhythms varied up and rarely ineffective, and even the longer numbers like "Mutation" and "Demons Blood" managed to fill out their britches without wearing out their welcome. Ultimately, Lure is quite a good album, and those of you who have enjoyed the quality roots death metal of acts like Nocturnal Torment, Necrovation, Skeletal Remains, Disma, Horrendous (among many others) would do well to sink your fangs into its articulate, engaging flesh.