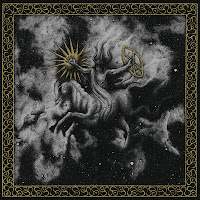 Switzerland, in its eminent neutrality, has never been the most prolific exporter of high quality metal music, but it seems like each decade you can count on some ephemeral wave of darkness to explode out of that country; in the 80s, it was Celtic Frost and Coroner, followed by the great Samael in the 90s, and now...Bölzer? With their Aura EP, the Zurich duo embarks on a refreshing tour of some classic black and death metal influences, but they stand up and own them with a fresh layer of ritualistic atmosphere that seems to reverberate off the walls of the Alps before escaping into the cosmos beyond. To be blunt, I wish I heard a lot more bands taking chances like this one does; too often do you hear the same old, tired 20-25 year-in-the-past US/Swedish death worship which fanatics tend to laud strictly through a sense of apathetic nostalgia. But I promise you: Bölzer evokes a sound both ancient and current.

The rhythm guitars have an enormous but ripping tone to them which can support both the drudging cemetery dirt of the low-end chords and the band's uncanny sense of harmony which pervades the exotic, immediately memorable tremolo picked progressions and grooves of "Entranced by the Wolfshook". A truly absorbing piece, and my favorite among the three on the EP, despite some stiff composition from its neighbors. The vocals range between broad, echoing van Drunen growls and raving lunatic barks and howls, but then the band will also tear into these manly mid-ranged cleans. I know its an unusual blend, but I often felt the music was like a collaboration between Incantation, earlier Samael and Mastodon, especially when those open vocal intonations arrive in the bridge of "Entranced...". Hell, the EP's finale, a nearly 11 minute behemoth called "The Great Unifier", is like a perfect hybrid of atmospheric blackened death-sludge, which effortlessly storms between blasted streams of dissent and sodden breakdown grooves. It's quite good, DAMN good, and eschews the normal sense of unnecessary repetition often associated with fattened track lengths.

Bass guitars don't seem to be a factor in this sound, but the richness of the rhythm guitar carving is so dense and atmospheric, simultaneously ethereal and crushing that the ears will only rarely need to wander from them, and usually to the vocals. The drums of HzR are vital and propulsive, though, and the substantial periods of tribal-based tom smashing lend the album much of its mountainous, Cyclopean flavor, a more esoteric and externalized sense of being than you usually get from Bölzer subterranean peers. It does not suffocate; it exhales. This music does not sound like it's being performed in a cave, but from the hills and heights, challenging the sky to swallow it, and it takes on a beautiful/ominous contrast, a mythic quality that glues the listener to a sizable swath of relistens that he/she might graze on its magnificence. Transcendental, memorable, earth-shaking and night-slaked ideas. Varied enough without losing consistency. Very eager to hear if Bölzer can pull off this level of expression on a full-length; but, for now, Aura is ample fulfillment.