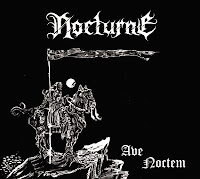 Dan Klein is the sort of musician who pisses me off (in a good way), because the guy's a beast on just about every instrument he lays his paws on. Which is a good thing, since he's the sole member of the Chicagoan project Nocturne. Generally when I'm hearing the first official release from a one-man or 'bedroom' black metal outfit, I am not expecting the level of overall proficiency and attention to detail paid on Ave Noctem. Sure, a guy might be a great guitar player, keyboardist or rasper, but Klein absolutely manhandles the drums and bass guitar, keeping them busy enough that even the most simplistic or atmospheric of guitar chord progressions doesn't hold the songwriting back. I'm not implying that this is an incredibly memorable album or that all its components are necessarily interesting of their own accord, but nowhere is Ave Noctem 'phoned in', and if I were to grade music simply on effort, this would be at the head of the class, because you can just hear the hunger rolling off every riff, groove, and fill.

Aesthetically, the guitars remind me a lot of the Scandinavian camp, in particular some of Satyr's playing on the mid-era Satyricon releases. Or maybe a bit of Quorthon/Bathory's earlier Viking-era riffing, or later Immortal. However, Klein imbues a lot of gladiatorial atmosphere in his chord choices ("Anxiopath", etc), so you feel like you're witnessing the carnal festivities from the side street of a bullfight, or the bleachers of an arena soon to be slaked with blood. Lots of intricate, airy chords being slung around, he's not just interested in pure, unchecked savagery. That said, he also incorporates spurts of fairly technical, dextrous muted phrases that create a contrast against the more solemn, expressive black metal chords. The drums are simply fantastic throughout, whether he's laying out a full-on double bass barrage, blast or something rock-based. Bass lines are imbued with lots of melody that plays to the strength of the rhythm guitar without necessarily copying it, and this circles on back to what I was mentioning earlier about the sheer balance of the record. No one instrument really outshines the rest, which is a rarity for solo acts in this medium. As for the vocals, they're your typical deep retching snarls, but he'll occasionally use some understated, rustic cleans ("Rites of Contrition", "Pain of Purity") which remind me of other folk-influenced black metal acts like Enslaved.

In fact, 90s/00s Enslaved is a great comparison for Ave Noctem overall, even if this is less atmospheric, progressive or mind-blowing. Riffs are varied to prevent even the longest tracks from becoming boring, and melody and aggression are meticulously counter-weighted to keep the composition fresh. You definitely get an epic heavy metal undercurrent in some of the tunes that might remind you of I's Between Two Worlds or the last two Immortal discs. The writing is both glorious and hostile in equal measures, especially some of the faster runs in "The Prodigious Plight", and the album's got itself at least a good dozen riff patterns that stick in your thoughts well after listening. I'd like to hear some exciting, sticky leads in here, but the fact that he's already pulling quadruple duty sort of exempts their presence. There aren't a lot of heavily experimented touches that change styles, with the exception of the titular interlude "Ave Noctem", spacious but brief post-rock piece with drifting, cleaner guitars. Lyrics are actually a bit unusual for this genre, since they are deeply internal/personal and have a doom-like quality about them. But ultimately, to think that it's all just one person is pretty shocking, since you don't usually get such a complete package. We're not talking the intentionally under-polished, grimy atmospheric depressive BM like you'd expect out of Striborg or Xasthur. No, if someone told you this was a new four-piece from Norway, you'd be hard-pressed to disbelieve it. Klein is THAT seasoned, and this debut is an obvious labor of love, which I obviously liked.