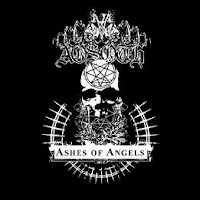 The dire forces of Aosoth are clearly not the type to shake your hand and parlay; their chosen form of communication is to cut your throat, chug a sanguine sampling, and then offer you forth as some demonic sacrifice. One of France's more grinding, venomous exports, they offer nothing but cruel, Satanic inspired hostility. Far more Arkhon Infaustus than Peste Noire, they just hammer the piss out of you.

Ashes of Angels is another release upon the prolific Agonia Records, and it follows the band's self-titled debut in 2008. This band is not really one for melody, so if you seek anything aside from the most grinding, filthy black metal, you will not find a safe harbor here. The band crosses their fiery paths with a mix of blasting excess ("Embrace and Enlightenment", "Summon the Dead", "Banished") and slower, mid-paced rhythms ("Communion Through Pain") where they let the hostility breathe. The atmosphere of this record is abrasive and violent, hailing you from the gutters and unwashed crawlspaces of the universe. Often the band will slow down the pace even further, and this produces some of more memorable tracks, like the creepy "Teaching/Erasing" and the Satanic victory of "Cries Out the Heaven". This is also one of the few bands to themselves in "Inner War"...well, not themselves exactly, but Antaeus, also fronted by the vocalist MkM (many former Aosoth members were also in Antaeus). It's one of the stronger tracks on the album.

Ashes of Angels is no revelation, but it's abusive enough to appeal to fans of the harsher side of European black metal. It's noisy and unforgiving, but dynamic enough to remain interesting, in particular through the slower material.

Highlights: Teaching/Erasing, Communion Through Pain, Cries Out the Heaven