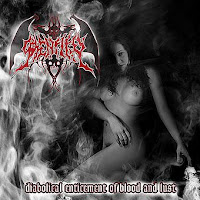 It's immediately clear that 9th Entity has great taste in women, for the model adorning this debut EP is as smoking hot as they are ever molded in the flesh of the human race. But how does the band's black/death metal mesh compare to their eye for seduction? Pretty well, in all honesty. Their thick tones and vibrant rhythms compare favorably the the Swedish bands that first spawned this hybrid, but the vocals are a lot more wrenching and the band has a simplified approach to the songwriting which you wouldn't find in pioneers Sacramentum or Dissection. Vocalist Antonio Acuña has a pretty cool, dominant style which seems to me a Chilean accent on Piotr from Vader, and this hoarse throat matches really well with the thick, battering rhythms.

9th Entity has created a solid introduction here, with over 30 minutes of material that never bores you, even when it's not at its best musically. A brief synth intro evades into the opener "False Idol's Followers", a powerful if effortless expression which loads on the atmosphere. "Serpent Plenilunium" begins with a riff as seductive as the song's title, organs shining across the mesmerizing rhythm before the band picks up the aggression in the tracks later moments. "De Sangre y Lujuria" has another of these killer lead-in hooks, like a mystic South American Slayer, and a driving, blackened thrash rhythm. Again, this band does not ever burst into technicality, they thrive off their devotion to a simple motif and lavish it with as much evil as possible. "Dogma del Padecimiento" maintains a blacker, slowly paced grinding edge to it, with the howls of vile winds and clanking of steel. Along with "Serpent Plenilunium", it was one of the highlights on this offering. "World's Decaying Crown" is perhaps the most rousing and brutal track of the EP, and yet another of its best, with a tight thrashing/death rhythm that had me fully onboard. The doomy "La virulenta Entidad del Caos" closes out the EP (aside from a brief outro) with a few moments of ponderous, serpentine slaughter and diabolic melody.