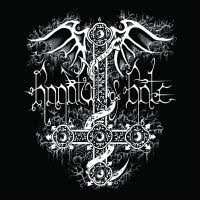 If nothing else, Italy's Handful of Hate is a damned consistent band, writing average if aggressive material that echoes the work of the black forces further North. Nicola Bianchi's spiteful snarling, a solid set of bleeding riffs, and a high end production (for the field of black metal) combine to damn their 5th effort, You Will Bleed to the deepest reaches of human suffering.

I was not stricken down quite as forcefully as when I first heard the band's 2003 album Vicecrown, but most of the 9 tracks here will suffice if you long for the crimson, antisocial violence of black metal in the vein of Dark Funeral, Marduk, Mayhem, Immortal, etc. Handful of Hate might not be quite so aggressive, but they manage to balance tempos well enough that you don't become flaccid through and endless blasting boredom. Enough of the band's diabolic force is used in the creation of cruel, thrashing rhythms as you will find in "The Pest'Son", the drudging "March of Hate" and the horrific glory of "Bliss Between Thorns". The album also ends with a nice pair of extremes, from the pondering evil of "The Fault to Exist" to the carnal, melodic "Extremism Made Fire". The lyrics here are pretty sweet:

Right on! You Will Bleed is another vibrant, open jugular emptying its essence into the massive cauldron of European black metal. It's not original enough to sate the avant-garde tastel it's not extremely hooky; it's not as violent or brutal as other bands in the field. But Handful of Hate know what they're doing, and if you've enjoyed past offerings like Vicecrowned or the previous Gruesome Splendour, this new effort will offer you further mileage.

Highlights: The Pest'son, March of Hate, Bliss Between Thorns, The Fault to Exist