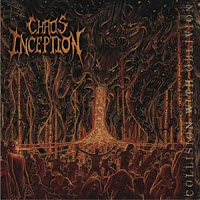 Chaos Inception may be a new band, having formed only last year, but they already have the chops of a far more experienced outfit, and Collision with Oblivion is a fine debut, showcasing the band's hooky, percussive riffing and grinding drums. Culled from the rosters of other US acts Fleshtized, Quinta Essentia, Blood Stained Dusk, and Convergence from Within, these gentlemen immediately clean the clocks of their other bands to produce a flurry of death metal which is far more Morbid Angel than Cannibal Corpse. The generally fast tempo of the material and the great lead work will probably also appeal to fans of Behemoth, Krisiun, and Hate Eternal, and the quality does not let up throughout the album.

The initial labyrinth of riffing, "Becoming Adversary" is a quick burst that demonstrates the band's level of aggression within 2 minutes, though the band's riffs get more interesting with the title track. The thick guitar tone of Matt Barnes is perfect to rival the rhythmic onslaught of Gary White and Cam Pinkerton, but rather than batter away for 100% of the time they induce some shredding, atmospheric moments where the rhythm guitars really churn the butter of dementia. "Black Vapor of Corruption Rise" and "The Scourge Infinitum" are two more juggernauts of blasting insanity, I especially loved the riff construction of the latter. "Desolate Beyond" is a 2+ minute instrumental in which haunting chords trudge below Barnes' frenetic fretboard exercises, and then the band returns to their relentless pounding through "Hand of Defamation" and the spastic "Pig Flesh Decimator". The final three tracks are no less acrobatic, in particular the grind and wind of "Regicide" and monolith discord that christens "Impurified".

Unlike a lot of USDM, Chaos Inception does not exist on the concept of brutality alone. There is a great deal of musicality to their riffing, which would probably impress fans of technical thrash as readily as the death sect. The mix of the album does it a great service, with blunt but warm tones that persist through the hammering verses and interesting solo bridges. Not just another gore band, they have a more mystical/occult lyrical scheme which better jibes with Hellwitch or Morbid Angel. I haven't heard a lot of death metal (or metal in general) from Alabama, and this was a refreshing, festering surprise.