Ancestors Blood - Return of the Ancient Ones (2008) 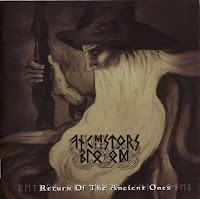 Though this Finnish band is only a recent discovery for myself, they have been releasing demos for some years, and finally produced a full-length effort in 2008. Ancestors Blood have a very simplistic style; slower paced, plodding black metal which is heavily laden in synthesizers and atmosphere. The vocals of Raud squelch, clearly derived of the Burzum school of thought, yet their tormented characteristic serves as a fine counterbalance to the very straight forward, melodic riffing and sorrow-filled landscape of synthesizer. The drumming of Pyromaniac (who also has his own band) is rock solid, though pushed farther back in the mix, it allows for the other sounds to stagger off into the atmosphere, and the entire album gives the effect of a wounded animal or man, dragging his limbs through the snows, leaving a trail of blood and memory.

No, Ancestors Blood are far from an innovative band, nor do they offer any complexity for your consumption. They simply craft great music from well tested concepts. The guitars are cruel and grim, though they often twist into the glorious melodies of the keyboards and cast their own shadows through very basic melodies. Return of the Ancient Ones is yet another of those pagan metal experiences which is a pleasure to listen in its entirety, individual tracks may not provide the beholder with the diversity or full immersion required for enjoyment. Listen to the whole damn record, and a different picture emerges, one of sadness and longing.

This album has a long intro, over 5 minutes in fact, but I'm not complaining, as the keyboards create quite a beautiful landscape of dark, ancient Finland, and beneath the white, whipping winds that no doubt straddle this sky, I envision all the creatures and the folks of old beneath, plying the streams and hewing the woodlands to their habitat's content. "To War and Glory" begins to take on a grimmer aspect, a clear representative to what you'll be hearing for most of the album. "Wisdom Opens the Gates for the King" creates a natural continuity, a flow straight from the tempo of the first track, and yet more glorious. Raud also uses an occasional narrative style tone, which he uses alongside his snarls, and it appears here. "Annihilation of Christianity" ups the majestic ante even further, with a beautiful guitar passage that envelops much of the track, Raud's torture becoming more immediate. "Shades of Life" grows more morose, and while it's a little duller than other tracks here, it is not a total loss.

Soon we foray on towards another fantastic track, that of the god "Ukko", which soars like an bird of prey across the forest roof of Lappland, it's underbelly a reflection of the layered snow beneath. "Fatherland" breaks out the double bass for the fastest rhythm yet to grace the album, yet the track is no less hypnotic than its forebears, and retains a charge throughout. "Reign of Terror" returns us to the band's typical pace of plodding, thoughtful atmosphere, and the album is closed out by "Rise of the Spirits of Ancient Heroes" and a resonant outro piece that picks up the storm of the original intro and carries it off on wailing, longing synthesized strings. Quite epic.

Return of the Ancient Ones is a quality debut, one I'd readily recommend to fans of a band like Summoning, whose strength also lies in simplicity of execution and repetitive patterning. The difference here would be the drumming, the vocals, and lyrical matter (though the ancient Finland of this band's heart is quite similar to the somber portrait of Middle-Earth that band creates). This is not 'depressive' black metal, though the vocals are typical for that style. The keyboards create uplifting environments, though lyrically it is just as sad in its own right. The production of the album is slightly above the bedroom standard, though never overdone. A certain crop of epic pagan black metallers will devour this album. It's not perfect, but I found it an enjoyable backdrop to both reading and grinding on the computer.

Highlights: Annihilation of Christianity, Ukko, Rise of the Spirits of Ancient Heroes

Vocals remind me of Nattramn of Silencer. Some cool stuff though, I quite enjoy the track 'Fatherland'