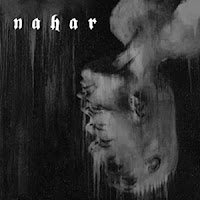 Nahar is a French two piece band performing minimal, heavily atmospheric black metal which resonates like a subterranean odyssey into the fabric and foundations of being. Sorghal (also of Nehëmah) breathes decrepit vocals in a relaxed style, like a solemn funeral goer that occasional bursts into maddened grief. Shaddar performs the instruments, making use of discordant, if simple, winding guitar lines, creepy bass flows and laid back drumming which creates a pattern of slumber. After a demo and EP, the project has signed to the great Avantgarde Music for this debut full-length, and it's ever a positive sign to see the smaller acts making some headway.

There are seven tracks across La Fascination Du Pire, the 7th being untitled. "In Red Light Perdition" is a subtle, haunting piece of ambiance that introduces the broiling sorrows of "Face of Extinction", which switches it off between a quickened pace and a slower, painful shamble. I really liked the eerie synthesizers which popped in at 5:40 in the track, only adding to its ghostlike atmosphere. "Where Other Have Drowned" opens with a driving, depressive hook before it, too, slows to a crawl. "Millenium's Echo" is dense and disturbing, with an understated bass line that heralds the inevitability of oblivion. "Desert of Redemption" is mystical, distant black metal with some more ringing, spooky synthesizers, and "The March of Reason" has some interesting breaks where the chords hover above the emptiness, before the lurching beat picks up once more. The final, untitled track is also quite lovely, the vocals wreathed in torment and the guitar work once again hypnotic and doomed.

La Fascination Du Pire certainly has its audience in the droves of depressive, bedroom black metal artists and fans that have sprung up this past decade. That said, the album has integrity and is successful in capturing the dark emotions of its intent. It sounds effectively lo-fi, but I rather like the approach to minimal drums and towering, raw chords that will crush your spirit.