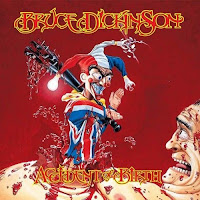 Accident of Birth was the 4th solo album from Iron Maiden's Bruce Dickinson, released at a time his alma mater was courting Blayze Bailey unsuccessfully in the vocal department. Unlike previous albums Tattooed Millionaire or Balls to Picasso, Dickinson seemed intent on returning to his metal roots with this release, rather than bland radio rock. Joined by former Maiden axe slinger Adrian Smith and a trio from the Tribe of Gypsies (including his good friend and producer Roy Z), he set out to make that a reality with a set of tunes which made the horrid Virtual XI laughable by comparison.

"Freak" is a strong opening track with a big, driving groove rhythm to the guitar (sure to please both the grunge metal advocates and those that had been missing Bruce's presence in the realms of heavier rock). The song has an interesting groove/breakdown with a dirty lead and vocal samples, but also a few touches of classic NWOBHM melody. The brief, psychedelic guitars of "Toltec 7 Arrival" lead into more 90s groove metal in the form of "Starchildren" (similar to stuff Roy Z would do with Halford), but Dickinson's cutting vocals keep it from going all out Alice in Chains. "Darkside of Aquarius" and "Road to Hell" are two of the stronger tracks on the album, very much what I'd like to think Maiden would be writing in this mid 90s period if Bruce was still in the tribe. Pure metal with good licks and excellent vocals.

Slowly bleeding, watch the vortex feeding
Like a swirling vulture on your face
Every hour the unseen rays devour
Your screaming eyes cry out but they are blind
Father, forgive me my sins
Give me the nails, I'll hammer them in

For the latter half of the record, I favor the orchestral touches of arena rock that alight upon the "Man of Sorrows", the angry title track with some excellent, if brief, wailing lead guitars; the groovy "Welcome to the Pit" with its catchy chorus, and the classy "Ghost of Cain". Other tracks like "Arc of Space" feature some great vocal performances, but the music simple did not sink in.

Along with its successor The Chemical Weapon, this represents the better of Dickinson's solo work, and superior to most of what Maiden was producing, even when Bruce rejoined a few years later (okay, with the exception of a few tunes like "Wicker Man"). The mix is killer and still sounds fresh today, and the writing is diverse enough to incorporate traditional metal elements, with glistening ballads and then-modern heavier groove rhythms (the success of these riffs varies, but Dickinson's vocals almost always save the day). It's a pretty tight record, though not essential like his 1982-1992 period with Maiden.

Highlights: Darkside of Aquarius, Road to Hell, Man of Sorrows, Ghost of Cain