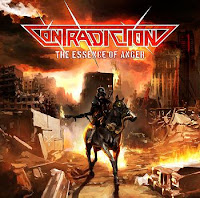 One might immediately lower expectations for a metal album when it opens with a George W. Bush Jr. sample, but Contradiction at least avoids the cliche 'taxes' quote for something else, a threat of intent which mirrors the band's own style, an aggressive and warlike slab of old school thrash that lacks the dated feeling of a great many peers. There is the influence here from the usual suspects, in particular Sodom, Kreator and Tankard, but Contradiction do not try and outpace their idols through sheer speed (like many of the sillier current of retrotards), they write pretty laid back thrashing tracks which carry enough power to push them to the fore of the rat pack. This is probably because Contradiction is a band of old timers who simply never hit the big time, having formed in 1989 and released 5 other full length albums before this one.

The Essence of Anger is not a great effort, mind you, but it has a certain quality to it that I find refreshing. At its most energetic, the riffs pop at you with semi-memorable aggression, but the band also evokes a lot of slower moments, which feel as if they echo from a dystopian nightmare, an empty city full of armed vigilantes and warlords (like the guy on the cover). Oliver Lux has that brand of constipated vocals, rich in accent and mildly reminiscent of Tom Angelripper, or perhaps a male equivalent to Sabine from Holy Moses. The best tracks here are all quite simple, like the thundering "Start the Action" which seems the perfect incitement to a 21st century riot; the Sacred Reich slamming of "Collateral Carnage" and "The Spectator"; or the very Destruction-like vitriol of "Life's End". Two of the songs feature Leif Jensen (Dew-Scented) as a guest vocalist.

The tones of the album are rich, especially the vocals, which soar across the rhythm like a steel throated cyborg issuing orders to a core of riot punks, who assault you from the shelter of rusted, burned out motor vehicles and graffiti-splattered concrete abandon. I was not riveted by a lot of the material, and they certainly do not set out here to re-invent the wheel, but I feel Contradiction is owed a certain level of respect for writing a true thrash metal album and not some 'Look at my hi-tops and patch collection, I am soooo fuckin' real' recycled garbage.