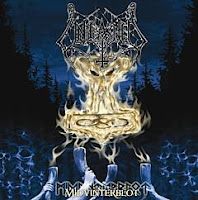 Coming off a stretch of abysmal offerings in the mid through late 90s like Victory or Warrior, there was only one inevitable direction for Unleashed: to return to their roots, and write the albums that earned their reputation in the first place. After a 5 year hiatus, they began to do so, beginning with 2002's Hell Unleashed, through Sworn Allegiance, and into this 2006 album Midvinterblot. While I can't compose a long stream of accolades for this album (and never could, for any of their work), this was a solid offering which at least had the band full circle to the level they were at with some of their earliest albums. Possibly, even surpassing those. And in contrast so many old school Swedish death metal bands in the crowded field of today, Unleashed were back to sounding like themselves...rather than aping somone else.

Unleashed maintains the same lineup as their previous record, with Johnny Hedlund on the bass/vocals, Fredrik Folkare & Tomas Måsgard on the guitars, and Anders Schultz drumming. Unlike many of their peers, Unleashed have kept a steady roster through most of their career, with only a few changes in the guitar department. These four know exactly what the band should sound like, and through Midwinterblot they hammer out 15 tracks in around 46 minutes. Yes, Unleashed keep things appropriately brief, which suits them, since they aren't exactly moguls in the riff factory. You may get 2-3 solid riffs per track, and a lead, but the band is not in the business of complexity.

"Blood of Lies" and "This is Our World Now" are quite an energetic one two combination to anoint this 7th full-length album, as both possess a thrashing energy and a decent, brief lead. I won't say that either of them is truly catchy, but they're enough to get the blood flowing and fists pounding. "We Must Join With Him" is a Tolkien-inspired track with a rolling verse rhythm, and some nice echo to Hedlund's chorus: We must join with Sauron. The title track is a stomping bruiser, similar to some of the riffs they did on their dull albums in the later 90s, but better. The speed of "In Victory or Defeat" is welcome, and the "Triumph of the Genocide" also delivers a sound beating with some nice thrashy speed along with its Rwanda massacre lyrics. "The Avenger" builds a good groove to it, with a nice break for melodic death in the chorus. "Salvation of Mankind" continues this melodic tendency with a solid charge, the lyrics espousing the clear, anti-Christian stance of the band:

Yeah, resurrect so I can vomit on the
The body of Christ

The band continues to build their speed further, with the scorching death/thrashing of "Psycho Killer", before another slowly chugging, groove-leaning track in "The Witch", with some rather lascivious, seductive lyrics. "I Have Sworn Allegiance" gallops along with a renewed fervor, the lyrics serving as a foreshadow to the whole 'Hammer Batallion' fan club schtick that would arrive with the album after this. "Age of the Warrior" opens with some Slayer-like speed chugging, and "New Dawn Rising" is another fist of thrash which occasionally bursts into winding death rhythms. The album ends with two of the stronger tracks of the 15, the rolling juggernaut that is "Loyalty and Pride", and the eerie yet glorious "Valhalla Awaits", which may have been my single favorite in the entire experience.

What you have is a long series of tracks here which are all served well by the honest tones and anchoring crunch of the production. Hedlund's vocals have rarely sounded better than here, and the riffs flowing beneath them tend towards a moderate to decent quality. Individually they might not excel, but they're forged into iron hymnals, and as a result, there are much worse albums you could kill 46 minutes with. The short length of most tracks ensures that they are kept exciting, and Midvinterblot is one of the best efforts in this band's entire career.

Highlights: We Must Join With Him, Psycho Killer, Loyalty and Pride, Valhalla Awaits