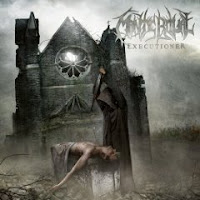 Ah, where would I be without the endless onslaught of old school thrashing delivered through the youth of the day? In fairness, this album Executioner is actually two years old, with the band releasing it under their old monicker Meltdown. Well, the name is now Mantic Ritual (an improvement), and the album has been released through Nuclear Blast, which proves to me that the popularity of this old sound is now fully rekindled, and we'll be seeing a fair share of it through the larger labels until it once again burns out. As far as their style, these guys actually mix it up, you can hear an imprint of NY/NJ area thrash/speed metal ala Whiplash, but there is also a bit of a European edge to the material.

Dave Watson has a vocal style which alternates between a harsher voice and a clean. I find the cleans rather boring, especially when the band gets crazy, but when he lets the vocals rip they become a lot more invigorating. The riffing is pretty well calculated, though rarely ever borders on the memorable. The guitars chug along with a nice, organic tone, and the drumming makes it all sounds good and old. There is some shredding, and though few of the solos are memorable, they have no problem busting them out where appropriate.

"One by One" is a thrust of pure old 80s speed, recalling a mix of Whiplash, Possessed and perhaps the Finnish legends Stone. Watson divides his vocal time evenly, and the gang shouts are welcome if a little predictable. "Executioner" has a riff pattern which bears a lot of similarity to "Mad Butcher", and this is used throughout a lot of the song, but there are some changes, and I like that Watson largely remains with the better vocals. "Black Tar Sin" is fast and venomous, primal and punishing, and breaks for some nice, hyperactive German breakdowns. The best song yet on the album. "Death and Destruction" also has some decent guitar work, and "Souls" and "Panic" also ring true. I should also mention that, despite having a song called "Thrashatonement", this band isn't all about the total retro stupidity that plagues so many of these young whippersnappers. For even despite the title, the lyrics are pretty meaningful:

In the corridors of institutions,
There’s a putrid smell
Of rotting minds.
That beg for something real to hold,
Instead of processed
Useless lies.
Mothers whore their weeks away.
As daughters learn,
To do the same.

Mantic Ritual have a lot of the pieces of the puzzle here, and I could easily picture them rising up in popularity to rival the Municipal Wastes and Eviles of the world. The album sounds good, modern yet loyal to its roots, and the deal with Nuclear Blast could mean huge things. Having said all this, there is no reason I would reach for this album over so many other thrash gems. It's fast and mean, and if you seek out only the basics, you could do a lot worse. But I found very little by way of memorable songwriting, and I had almost forgotten every song as soon as the album was over. There is very little character, it's yet another generic crossroads of many other bands that wrote amazing works. However, ven the gods of thrash had their off days, and perhaps now that Manic Ritual have cleared this from their system, they will write something far more interesting the next time out.