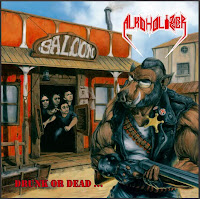 Drunk or Dead... is the debut from Italians Alkholizer, and if their name (and the album's title) is not already apparent, they play a brand of alcoholic thrash metal with many of the stereotypes you've been bombarded with in the past few years. Their style is very heavily influenced by the German pioneers such as Sodom, Destruction and especially Tankard, who they most resemble lyrically. The vocals of Alessandro resemble a hybrid of Gerre and Tom Angelripper, and the band plays forcefully, which a lot of other drunk thrashers of late do not.

It's this aggressive riffing that saves the album from being a waste, and the fact that not every song is about getting drunk and 'thrash' itself. Sure, it has songs called "Thrash Metal", "Drinking Till Death", and "Alcoholic Metal", and this has been done to death (and better), showing very little of a creative side. But as far as just a bunch of guys having fun and revisiting the 80s, some of the songs deliver. The wild "Sardinian Beer" has some intense thrash akin to later Tankard, and the hyper "Age of Misery" reminds me of that band's earlier speed (ala The Morning After). "Kill Without Remorse" and "Thrash Metal" are also loaded with volleys of street ready speed and thick palm-muting frenzy.

The album sounds quite thick, and the meaty chops, distorted driving bass and tireless drums all converge successfully below the vocals. This is another of those bands in which the vocalist will start screaming for no necessary, but at least the majority of the vox are solid. It is unlikely I would ever reach for this album over one of their influences, but the music is not bad, and fans of the retro scene who are obsessing over every tired trope of the past will find sustenance here, for at least the album offers a boot up your ass.