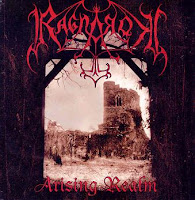 It's always surprising when a band you think is going to be huge just doesn't seem to pass that intangible scene test which separates the chaff from the wheat. For me, Norway's Ragnarok will always be the wheat, the whole field, as they are one of the few bands that has never put out an album to disappoint me. I can't even say the same for their peers like Emperor, or Enslaved, who have each released efforts I found middling to the extreme (if well in the past). The arrival of the debut Nattferd in 1995 was another breath of fresh hell from the Norse hordes. It showed enormous raw potential, which the band later polished for their next effort, Arising Realm.

An increased use of keyboards is noticeable here, and they make a wonderful contrast to the band's raw, primal punishment. I really adore the atmosphere of the album, in particular the vocals of Thyme, which were among the best in black metal. Also of note are the sharp, buzzing guitar tones and the huge reverberation the album creates, setting up the synth tones which pulse through the backdrop, a landscape of forgotten haunts. Ragnarok were also eschewing the epic length of their peers' compositions to craft manageable chunks of vitriol.

The intro to this album sets the stage through a dirge-like keyboard piece that takes a shift to the glorious at around the 1:20 mark. The synths of Arising Realm were performed by Pål Espen Johannesen, as well as Shagrath of Dimmu Borgir, and they do bear some semblance to what that band was releasing at the time. "God is Wasted" arrives on the wings of crashing thunder, and immediately creates the stark atmosphere that will dominate the remainder of the album, like a raw, snarling upgrade to Hellhammer. Of particular importance in this track is the riff at 2:00, miserable and beautiful, evoking a trance-like suicidal euphoria. "Searching for My Dark Desire" is lavish and desperate, a charge action given strength by the weight of its excellent, morose depths (I speak of the riff around 1:30, with the somber keyboards to back it). "En Verden Av Stein" crashes with melody, Thyme's rasping vocals like a lost emperor wandering the barren frostlands. "Time Before Birth of Light" is another forward blitz, conjuring a touch of Bathory and Hellhammer, though heavily saturated with majestic melody. "My Hate is His Spirit" swaggers like a drunken storm giant, erupting into another of the band's thrust maneuvers behind Jontho's kit abuse, and then a fine section where the guitars briefly drop to let the synth and bass take center stage.

The band has prepared two more hammerings in "My Refuge in Darkness", which opens with some epic acoustics, and "The Reflection from the Star World Above", a barrage of bestial expression with a solid, atmospheric break that spews a sad guitar melody and ends with a deep synth grinding against its final pleas. "The Fall of Christianity" accents its teachings with some orchestral piano strikes, and "The Predicted Future" paces out the album at over 7 minutes of the band's somber, thundering melodies. Though most of the record is nigh flawless, it saves one of its more emotional tracks for the climax, "For the World I Am Blinded". Post-climax, the acoustics and keyboards of the outro fuse to carry us away from Arising Realm's dark empire.

Again, I'm not sure why this album (and this band) did not create a larger stir. Perhaps it was due to the proximity of Anthems to the Welkin at Dusk, or Enthrone Darkness Triumphant, but in the end, I have enjoyed this more than either of those crowd favorites. Arising Realm would set no record for extremity, in fact the ground it was treading was rather secure...tap the best of both the underground savagery of Norse black, and the subtle textures of symphonic accessibility that were accruing popularity for Borgir or Cradle of Filth. To my ears, it still musters up memories of grim glory, undeath and mysticism, and it's one of Ragnarok's very best, alongside the successor Diabolical Age.

Highlights: God is Wasted, En Verden Av Stein, Time Before Birth of Light, The Fall of Christianity, For the World I Am Blinded