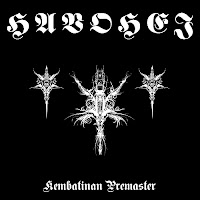 Here's one I've been sitting on for some time, as the mood it creates is one that I only occasionally have the stomach to visit. Those of you familiar with Paul Ledney's work (in particular I speak of Profanatica and Havohej) know that he's always had a proclivity for engaging, disturbing material, a stark contrast from much of the USBM scene. If you've been following the renewed activity of this band (the Tungkat Blood EP in 2007 and Hornbook Seytan EP in 2008) you'll know that an increased use of ambiance and industrial noise has crept into the style. The primitive, vile black metal heart still pulses blood beneath this sheen of subterranean endeavor, and surely you will hear brief touches that recall the classic Dethrone the Son of God album (now 16 years old).

Kembatinan Premaster carries forward the torch of minimalist abrasion that fueled Ledney's past releases with this band, in a haunting and fascinating stroke to the psyche, a black spike of nihilism that will enter through the temples and snake its way down into the hearts, stomachs and intestines of those who behold it. This album is a bowel movement for taste, complexity and pretentious fuck all, derisive in its honesty and divisive in its affectations. The title track opens like an industrial defibrillator, before a driving beat thrums to life below a wall of hovering noise and Ledney's perverse rasp. "Pious Breath" continues the swelling noise with a faster, almost blasted beat, and "Bloud and Souls" feels like you're about to be slapped upside the head with Ministry until the tortured throat opens and the man summons oblivion. "Melancholike" is further dense, turbulent noise with the accompaniment of drums and grimness. One of the more fascinating tracks is "Sundowning (Destroie Men and Beasts With Lookes)", which feels like Tangerine Dream and Fenriz jamming while a vacuum sucks your brains out through your nose. I also fancied the piercing pangs and slugging of "Hatefull Unto God" and the brief, oily swell of dark ambiance that closes the album in "Homerica Medicatio".

This is truly a 'bedroom' style release, but I don't mean that in any trendy sense, just that an album like this can be recorded with a bare minimum of equipment and a simple piece of software. That does not render it any less profound or interesting. The noise elements here are actually accessible when compared to an artist like Merzbow, but there is just something so dark about what Ledney has accomplished. It fucks with you, it hypnotizes you, and it makes you hate all life, and yet, appreciate it...